A series of cold fronts brought moderate falls to parts of southeast Australia, while a surface trough produced showers and thunderstorms in central to southeast Queensland and northeastern New South Wales.

Past seven days: At the start of the week, two cold fronts tracked across the southwest and southeast of Australia, generating light falls along parts of the south coast of Australia, and eastern Tasmania. The cold front in the southwest tracked across the Great Australian Bight, with an associated low pressure system developing to the west of Tasmania. Widespread light falls were recorded across southeastern South Australia, most of Victoria, western and southern Tasmania, and southern New South Wales. Heavier falls were reported in western Tasmania, southern central to northeastern Victoria, and in elevated parts of the Snowy Mountains in New South Wales.

In the north, a broad surface trough stretched from the northwest of Western Australia, across central parts of the Northern Territory, and from the northwest to southern inland of Queensland to the central coast of New South Wales. Thunderstorms and showers developed over northeastern New South Wales, and in parts of central to southeastern Queensland, generating light to moderated falls.

In the middle of the week, another cold front tracked across southeast Australia, and brought light falls to southeastern South Australia, and parts of western and central southern Victoria, while moderate falls were recorded in western Tasmania.

In the last part of the week, a surface trough extending through eastern Queensland combined with an upper-level disturbance, and generated thunderstorms and showers with moderate falls recorded in areas from central to southeast Queensland. Some isolated, heavier falls were reported around the Southeast Coast District. Isolated thunderstorms also developed through the central interior of Western Australia and in central parts of the Northern Territory. Onshore flow brought showers to the north tropical coast of Queensland at the end of the week, with moderate falls recorded between Innisfail and Tully.

Rainfall totals in excess of 50 mm were recorded in some locations around the north tropical coast of Queensland, and in part of western Tasmania. The highest weekly total was 103 mm at Mount Read in Tasmania.

Rainfall totals of less than 10 mm were recorded along the southern coast of Western Australia, most of remaining parts of Victoria, and parts of northeastern Tasmania and southern New South Wales.

Little or no rainfall was recorded in most of Western Australia; the Northern Territory; South Australia away from the southeast; northwestern Victoria; most of inland northern and central to western New South Wales and along the State’s central coast; and western, northern and southern inland Queensland. 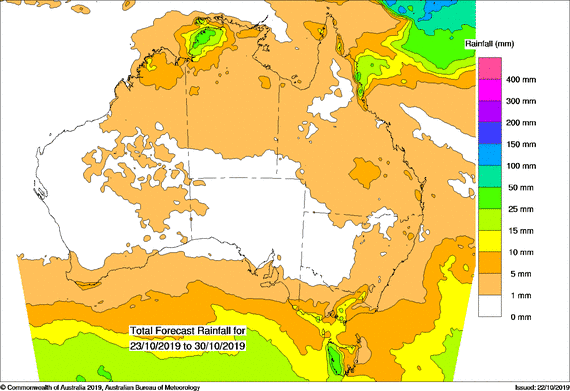