Measurement of insets gets Balls rolling on carbon Organic carbon and other metrics gathered from Norwood Agriculture and can be displayed using FarmLab software. Photo: FarmLab

AS THE FEDERAL Government’s target of a carbon-neutral Australia gets ever closer, grain growers are looking for signposts as to how they can be part of the solution while maintaining autonomy and running profitable as well as sustainable enterprises.

Feeling there is no time to lose, producers Hugh and Sarah Ball are charting their own course by benchmarking their Moree property Norwood as the first step to achieving their goal of being not just carbon neutral but carbon negative.

With a focused consulting team around them including Delta Ag Moree agronomist Rob Long and FarmLab account manager Ben Barber, they are moving towards carbon insetting, which will track and measure their farm’s carbon balance within their current business unit.

In contrast to carbon offsetting, which generates credits bought by separate businesses, the Balls believe insetting will allow them to forecast their carbon footprint in the same way they forecast grain yields or farm expenditure, and add value to the grain, pulses and cotton produced.

The Balls are building a carbon-accounting system which factors in biodiversity, as found in the native vegetation which covers 20 per cent of the 8300ha Norwood Agriculture holding.

Hugh and Sarah purchased Norwood in 2020, along with the adjoining Midkin South, from Sarah’s father Peter Glennie.

“Peter held a strong appreciation for the natural world and the role wildlife and insects, trees and rivers played on the farm, always valuing the role the native vegetation areas played in supporting the farming business,” Mr Ball said.

However, retaining it is not without its costs.

“We have to keep it clean; we have to control the weeds and the feral animals in it.

“The offset area must create an income for the business.”

Through tax breaks or financial incentives, Mr Ball feels the Federal Government should reward operations like Norwood Agriculture for retaining and managing native vegetation areas which contribute to the national target of net zero emissions by 2050.

“Until there is a benchmark for biodiversity and a certified way to measure it, it will be seen by many as being secondary to a farm’s emissions and carbon balance.”

“Carbon neutral can be achieved with no consideration to biodiversity, but this is not the path we want to take.”

The Balls grow scale wheat, barley, canola, chickpeas and faba beans over winter, and sorghum and cotton over summer, and aim is to have each of their farming enterprises individually achieve measured carbon-negative outcomes.

“We have achieved this on our cotton-production land and recently completed our broadacre grains area audit.

“We are chasing whole-farm accreditation.”

Best-management practice certification is available to Australian broadacre farmers through myBMP for cotton and Sustainable Grain Australia, primarily for canola and malting barley.

They both provide some sustainability assurances that benefit the exporter as well as the grower.

Hugh estimates BCI delivers a premium over non-accredited fibre of roughly A$3-$7 per bale.

“This is driven by the merchants, and equates to less than 1pc of value.

On its own, it does little to cover expenditure required to reduce a farm’s carbon footprint, but Mr Ball said it is part of the production story growers, markets and the industry as a whole should be able to show.

“Branding is important; we want customers to be able to scan a code on a cotton or grain product and be able see where the fibre or grain has originated, and the footprint made through its production.

“The cotton industry can already see a monetary reward for BCI accreditation.” 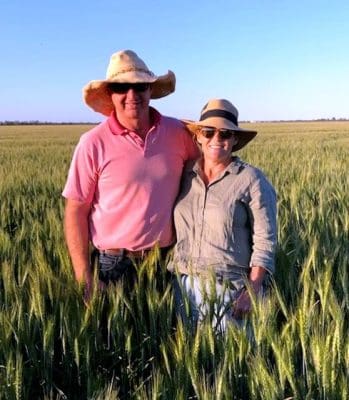 Hugh and Sarah Ball at Norwood.

Ahead of whole-farm accreditation, the Balls are already making changes in their expanding operation.

“We have made a conscious effort to replace our old irrigation pumps with more efficient ones; we continue to feed electricity into the grid; we’re trialling slow-release fertiliser pellets and manure blends.

“We’re trying to take to take steps to minimise our carbon footprint.”

This is despite them having no plans to enter the carbon market and sell their carbon credits.

“For the foreseeable future, we believe the credits should remain connected to the farms or the commodities they produced.”

As one of the first steps on their carbon-accounting journey, the Balls are analysing their soil more thoroughly.

This analysis indicates how much carbon is being sequestered through photosynthesis, as plant growth pushes roots into the soil.

“Through the roots is how carbon is locked into the soil, and the Clean Energy Regulator requires that to be stored for period of 25-100 years,” Mr Barber said.

While measurements of nitrogen and phosphorus levels are still collected to steer rotational and crop-nutrition decisions, Mr Barber said in-depth soil data was useful to this “new wave” of agronomists looking for additional guidelines from their clients’ paddocks.

“Our job is not to replace the agronomist.”

Data about soil nutrients, as well as more detailed metrics such as the amount and type of microorganisms in soil, are all helping to build a picture of Norwood.

Mr Ball said some input data is already at growers’ fingertips, and can feed straight into the carbon equation on a digital platform.

“The data will be the big thing in proving you are who you say you are.

“In time, we believe the data we are recording, especially around carbon, emissions and biodiversity, will further value add to the commodities we produce.”

It can also guide decisions around rotations and varietal selections.

“We foresee the ability to have enough data to make crop-production decisions to maximise carbon sequestration and forecast emissions on individual crops.”

The Balls contacted FarmLab in 2020 to help them develop a digitised carbon baseline recording platform for Norwood Agriculture.

The data gathered will be used both in commodity marketing and to make better real-time management decisions.

“It’s the My Health Record for the farm,” Mr Barber said.

FarmLab’s software is in use on roughly 20pc of all carbon projects operating in Australia, and plenty of overseas ones, including Rupert Murdoch’s Matador Ranch in the US state of Montana.

“It provides an opportunity to look at how a farmer can offset emissions from cultivation with an area that hasn’t been touched.”

Mr Barber said the Balls were “very progressive” in embarking on the self-guided carbon-audit process, and were not alone.

“More and more producers are looking at carbon insetting.”

In recent weeks alone, the Federal Government has reannounced a biodiversity credit scheme for carbon farmers, Paraway Pastoral Company has received $75 million from the Clean Energy Finance Corporation, and the Victorian Government has launched an app to help sheep producers cut carbon.

They all point to metrics for offsetting and for livestock being well ahead of cropping in the policy and implementation space.

At a national level, the Grains Research and Development Corporation earlier this year released the findings of a CSIRO report about emissions from Australian grain farming, and GrainGrowers released its Carbon and Cropping report in October last year. 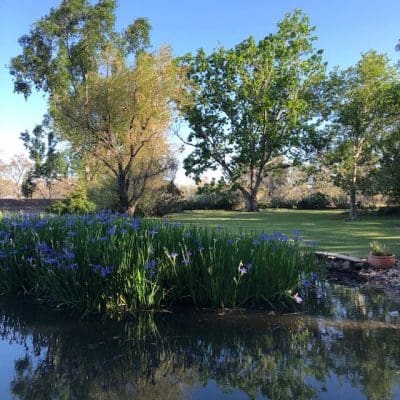 However, neither factors in biodiversity as part of a whole-farm approach.

“We’re not saying what we are doing by focusing on carbon, emissions and biodiversity is right or wrong, good or bad or what anyone else should be doing; rather, we are doing what we believe is right,” Hugh Ball said.

“We need to be good custodians of the land and water and improve our social conscience, the industry needs to be sustainable and accountable.

“There’s a lot of noise, and we don’t know what it means.

“It’s our job to understand this space; it’s not going to go away.