AUSTRALIAN growers are producing low emissions-intensity and high-quality cereals, pulses and oilseeds, according to a factsheet published today by the Grains Research and Development Corporation (GRDC).

The study entitled Australian Grains Baseline and Mitigation Assessment found the Australian grains industry exhibits low greenhouse gas emissions for each tonne of grain produced compared with other grain producers including the EU, US, Canada, Russia and Ukraine.

CSIRO used a 2005 baseline for establishing emissions form Australian grain production. It aligned with the reference year used for Australia’s Nationally Determined Contribution under the Paris Agreement, the international treaty on climate change adopted in December 2015. 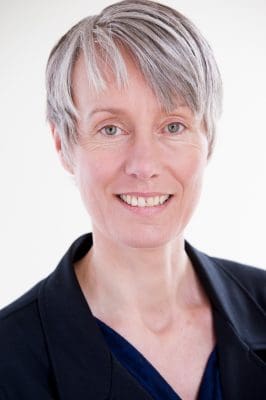 “If Australia can produce grains to feed the world at relatively low greenhouse-gas intensity there is global benefit,” Dr Sevenster said.

“We focused our assessment of mitigation opportunities on measures that would maintain or improve average production across the sector and found that it is possible to increase production dramatically while keeping net on-farm emissions more or less constant.

“While this is not the same as reducing emissions, it is a very important finding.

“The next step is to determine what information and tools farmers need to make those modelled scenarios reality.”

The GHG intensity of Australian grains is already low compared to many other exporting countries, but it is important to stay competitive on a global market that increasingly focuses on sustainability credentials. This could be achieved while at the same time increasing production.

The study finds offsetting of emissions via reforestation seems the most viable option to reduce absolute emissions. This would come at a cost to the sector, which could be compensated for by increased production from a range of technologies which include slow-release or stabilised fertilisers, better decision-making tools, precision agriculture, AgTech and strategies like N banking, top-up or seasonal budgeting.

GRDC chair John Woods said while the risks of climate change and variability, including low rainfall and increased temperatures, were significant to the Australian grain industry, they also presented opportunities in a changing environment.

“International markets are now looking to source grain grown with the lowest emissions and they should be looking at Australian grain growers,” Mr Woods said.

“We are amongst the most efficient producers in the world.”

“As growers, we continue to apply farming practices that result in world-leading low emissions intensity grain production, while maintaining and improving profitability.” 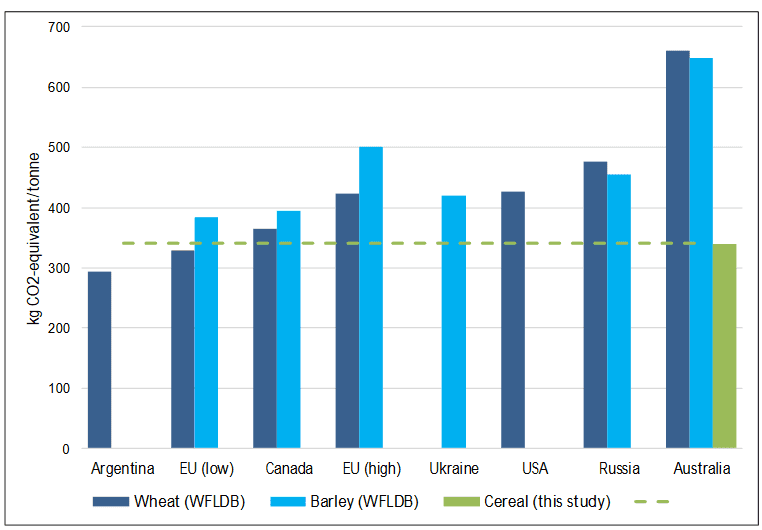 Figure 1: CSIRO greenhouse gas intensity (GHG) is shown in green. It compares with GHG intensity results for wheat and barley by country as available in the World Food LCA Database (WFLDB). All data exclude emissions from land use change. According to the WFLDB and equivalents, the GHG intensity of Australian wheat and barley is at the high end of the range compared to other countries, and the highest when including land use change emissions. This is partly explained by the use of tier–1 emission factors which are too high for Australian conditions.  Source: CSIRO

Click here to see the GRDC factsheet which summarises the CSIRO study. 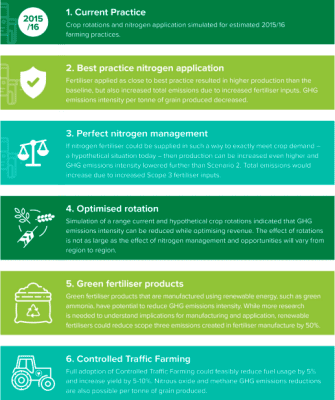 He said six scenarios to reduce emissions intensity were modelled, those being:

“These are key areas where GRDC has a long track record of research, development and extension (RD&E) investment and where we will continue to invest to drive profitability for growers and enhance environmental outcomes.

“Two prime examples of GRDC’s ongoing investment in this area include extensive nitrogen use efficiency research and our 2019 CSIRO ARENA investment to develop green ammonia fertiliser.”

Mr Woods said the CSIRO report indicated the collective adoption of modelled scenarios could reduce greenhouse gas emissions intensity per tonne of grain by up to 15pc.

“This report has identified opportunities for further research and demonstrated that best practice farming has the potential to further reduced emissions intensity for Australian growers.”

He said the report’s findings gave the grains industry a realistic pathway towards reducing the greenhouse gas intensity of Australian grain production as part of a profitable grain growing business sector.

Recommendations from the report will help inform RD&E that supports a trajectory towards reducing the GHG emissions intensity of Australian grain production through practices that can be integrated into profitable grain-production businesses.

Broadacre cropping in Australia has two national growers groups, GrainGrowers and Grain Producers Australia (GPA), and both welcome the report.

With the release of GrainGrowers climate policy in 2020 supporting net zero for agriculture by 2050, GrainGrowers has sought more research, education and tools for growers working out their best course of action and the release of the GRDC report greatly supports this.

“We welcome the report as it provides more data for the Australian grains industry and for growers as they consider emissions and make decisions based on their extensive knowledge and understanding of their own farms and communities.” GrainGrowers chair Brett Hosking said.

“This report recognises that our Australian growers are already leading the world in adopting practises that have seen improvement in a really complicated space.

“Practices such as reduced or minimum tillage, progressive cropping rotations and precision application of inputs are already seeing reduced emissions while ensuring the production of food isn’t compromised.”

Mr Hosking said the report is focussed solely on grain production, but it was also important to consider the whole farm business which will be unique to each grower.

“GrainGrowers encourages more work to be done on different enterprises to ensure growers are armed with the best information as they make decisions about emissions in their business.”

Mr Hosking said solutions to further reducing emissions required investment in data and technology to ensure growers have the information and tools they need.

“We encourage government to partner closely with the grains industry, ensuring as growers we can play our role in reducing emissions.”

GPA chair Barry Large said the report and its modelling will be the subject of healthy discussion among grain producers, government agencies and industry group.

“The critical question this report underscores is, ‘how do we collaborate and invest strategically to ensure Australia’s high quality, low emissions intensity grains are converted into real commercial value, to improve our export competitiveness and returns to growers?’

“This report may indicate we’re in a good position now – but when it comes to action on sustainable production on-farm we also know there’s no room for complacency, to help secure a better future.

“While we can and always need to do more to reduce emissions, including advancing initiatives such as local manufacturing of green fertilisers, this report does signal to global export markets that if you’re fair dinkum about climate change, and you need high-quality food and feed grains, then Australia’s the place to buy grains from, to get real value.”

GPA RD&E spokesperson and Victorian grower Andrew Weidemann said the report’s findings that pointed to the “global benefit” of Australia producing grain at relatively low GHG intensity, and that a cut in Australian production was likely to result in increased production in regions with emissions exceeding Australia’s, were significant.

“This report gives us the basis to send a clear message to global grain markets that we are efficient in growing the maximum amount of grain from every millimetre of rain,” he said.

“It also says we maximise our carbon footprint in producing food more efficiently than other competing countries and as Australian farmers we need to ensure we continually strive to improve our marketing of grain to maximise returns.”