CENTRAL Queensland (CQ) agronomy stalwart, Maurie Conway, was the worthy winner of this year’s AgForce Service to Industry award that was presented at the association’s annual gala dinner in Emerald on Friday night. 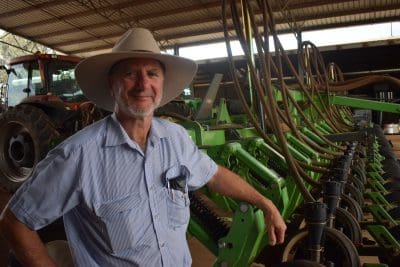 The award was a fitting tribute to the long-serving Queensland Department of Agriculture and Fisheries technical specialist who is set to retire from the department on Thursday after 29 years of service.

Mr Conway grew up on a family farm at Baralaba and started work with the DPI in 1970, initially in pasture research before moving on to farming systems and crop research.

As an agronomic authority in CQ for nearly three decades, he played an integral part in the development and adoption of farming systems uniquely suited to the vagaries of CQ’s variable climate.

“CQ farmers are farming in the most variable climate of anywhere in the world. While there are climates that are harsher, there is nowhere more variable. Any month of the year can be extremely wet or extremely dry here,” he said.

See full story on Maurie that appeared on Grain Central on October 27   https://www.graincentral.com/cropping/mauries-legacy-of-farming-know-how-in-central-queensland/