Canola harvest – to windrow, direct-head or both?

CANOLA growers in the southern cropping region who have traditionally windrowed prior to harvest are being encouraged to consider direct-heading as an alternative option in at least a portion of this year’s crop. 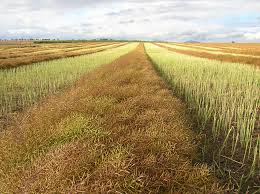 Canola growers in the southern cropping region who have traditionally windrowed (as pictured) prior to harvest are being encouraged to consider direct-heading as an alternative option in at least a portion of this year’s crop.

While many growers have chosen to windrow their crops in the past in an effort to manage variable maturity within the crop and to avoid pod shattering when direct-heading, research is showing that direct-heading can offer multiple economic and practical advantages.

Grains Research and Development Corporation-funded trials demonstrated that direct-heading canola provided the same yields as well-timed windrowing (cutting the crop and placing it in a windrow on the stubble for harvesting later) and better yields than windrowing too early.

Many growers consider direct-heading canola to be risky and that high shattering losses are inevitable. However, improved management and timing of harvest have meant that it is now proving to be a cost-effective option.

Mr Street suggests growers who are new to direct-heading should consider using a combined approach to the practice.

“Growers can windrow most of their crop as normal, but then try direct-heading in a paddock or two and assess for themselves how well it works,” he said.

Direct-heading canola is an especially viable option for growers who have their own harvester and can direct-head at the optimum time.

Mr Street said direct-heading could save $30 to $40 per hectare through using only one pass of the harvester compared with two passes of machinery when windrowing and then harvesting.

This cost saving is particularly important in the low rainfall zone where yields may be less than 1t/ha. Low-yielding crops can also lead to unstable windrows, which can be blown around the paddock or result in pod shatter in windy conditions.

GOA trials suggest there might be a wider window of opportunity for direct-heading compared with windrowing.

“Trials have shown the optimal timing of windrowing to be very short, maybe as little as a couple of days,” Mr Street said.

“Other GOA trials looking at the effects of delays to direct-heading canola have shown yield to be quite stable after maturity unless the crop is impacted by extremes of weather. One trial showed no decline in harvested yields for 17 days after harvestable moisture was achieved.

“This means that growers can harvest a lot more canola within its ideal yield window if they are direct-heading compared with windrowing, which can be very expensive if they start too early.”

One concern often raised with direct-heading is that, compared with windrowing, it means harvesting starts much later because crops are left to mature naturally.

“In many cases, growers are suggesting harvesting of a windrowed crop can start two weeks or more before a comparable crop left for direct-heading. But I suggest that if growers are seeing that level of delay in harvest, they are windrowing far too early,” Mr Street said.

“My advice to growers is if it is green, it is growing more yield and, after all, yield is what we’re here for.”

The potential yield losses from windrowing canola too early can be greater than losses due to pod shatter while direct-heading.

“I think growers have tended to overestimate losses from pod shattering due to direct-heading or delaying windrowing. This is understandable, as shattered pods are quite a tangible loss which growers can see and touch,” Mr Street said.

“Growers should try and make some more educated assessments of any losses observed. One easy ‘rule of thumb’ is that one pod per meter square is the equivalent to a yield of 1kg/ha. More than 50 pods/square metre would need to shatter to result in a 50kg/ha yield loss.”

One major barrier that growers report to adopting direct-heading is that of uneven crop maturity caused by changes in soil type or elevation.

In paddocks with crops at varying stages of maturity, growers could consider windrowing or harvesting the crop in two stages, or direct-heading when the later ripening areas are ready.

Further details about Mr Street’s research into direct-heading are contained in the September-October edition of GRDC’s Ground Cover magazine or can be viewed on the GOA website at http://www.grainorana.com.au/.