PRICES for 2017 Australian canola are showing no signs of slipping from their 2016 levels, factoring the recent rise in the value of the Australian dollar, and a fast-start shipment program, with EU the top customer.

“Even though we have seen the Australian dollar rise, which has had a deflationary effect on farm-gate prices since harvest, we are still looking at attractive returns over A$500 a tonne,” Mr Goddard said.

“There has been an overall shortage in rapeseed or canola this year.”

Canola bid prices for nearby delivery yesterday and for delivery new crop were both around A$530/t port.

Subject to disease risk and how the season unfolds, planting choices will be made between oilseeds, cereals and pulses.

Farmers may rank their perception about stocks of canola, on-farm and in commercial storages, differently from those of cereals waiting to be sold and shipped before next year’s crop comes in.

However, the canola export task has begun strongly, especially EU-certified-sustainable canola from WA heading for crush markets in the EU.

Shipments, from harvest time in November, will have reached 2Mt by around the end of February. 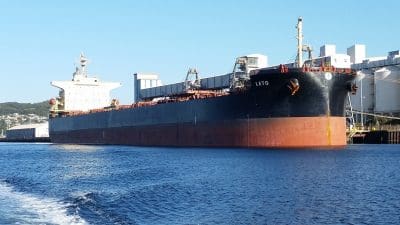 One of these bulk cargoes shipped a record for the Port of Albany, WA, with a cargo of 60,000t of canola.

Australian seed is a strong choice for EU buyers because it not only has EU sustainability certification, but also the eventual component products of crushed Australian canola give versatile choices for end-markets.

Ukraine has been a long-time supplier of canola into the EU marketplace and is Australia’s strongest competitor, supplying over 1Mt a year.

Australia’s commitment to meeting EU sustainability certification (see note at bottom of article) has helped to build its credentials  in canola to EU (non-GM and GM) over multiple seasons,.

Meanwhile, Canada, having not been a major supplier to the EU, is becoming more active, without necessarily reducing Canada’s multi-million tonne sales to China and Japan.

Canada is predominantly a GM supplier.

EU internal markets typically differentiate price for GM and non-GM for the seed (input) and for the products of the crush.

Enduser-buyers’ willingness to pay is a big factor in the relative proportion of GM and non-GM canola seed imported to EU.

GM soybeans, for example, are shipped in millions of tonnes into EU and the products find ready markets at their price.

The issue for GM and non-GM canola is the opportunity to sell the meal and products at a good price into respective (GM and non-GM) markets allowing the crusher to be competitive into the biodiesel market (claiming credits, see note below) and into the feed market.

“A consistent spread between the price of GM and non-GM has enabled the supply chain in EU to handle a certain quantity of GM,” Mr Goddard said.

“There is opportunity to sell meal at a good price into the non-GM market to buyers prepared to pay the premium for Australian non-GM such as dairies and some monogastrics.”

…that any oilseed exported to the EU for use as a feedstock for bio-energy must be accompanied with appropriate documentation certifying that the canola was grown, stored and shipped in a manner that complies with the specifics of the Directive.

While a number of schemes have been developed to certify bioenergy feedstocks, only two are suitable to certify Australian grown and exported oilseeds.  These are the ISCC Scheme and the 2BSvs Scheme.)