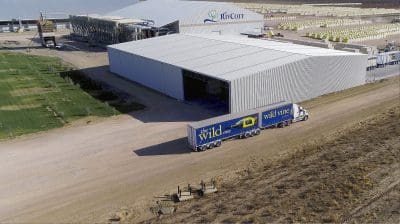 RivCott will be commissioning its three new 12-foot stands this season. Photo: RivCott

THIS YEAR’S Australian cotton crop may be the smallest in more than 30 years, but at its northern and southern extremities are two shining examples of confidence in the industry beyond the current drought.

In the Northern Territory, Tipperary Group has tripled its production from last year to a new high for the diversifying cattle-based operation, while in the Riverina of southern NSW, Australia’s RivCott gin is preparing to test its increased capacity.

Already the biggest in the country, RivCott is taking its capacity from 120 to 140 bales per hour, and will be commissioning its new stands with lint to be harvested in coming months.

Tipperary is located south of Adelaide River, and has this year planted its biggest ever cotton crop, made up of 200ha dryland planted on 7 January, and 100ha area which can be irrigated with a centre pivot if required.

It was planted from 20 January.

“We’re hoping both can be supported by rainfall only,” Tipperary Group general manager David Connolly said.

“We’ve had about 650 millimetres of rain since the start of October, and both are doing very well.”

A storm last week dumped 50mm on the crops, just when Mr Connelly said they were starting to look like they needed a drink.

The cotton will be picked in May-June before making the long journey to Dirranbandi in south-west Queensland for ginning at the Cubbie facility. 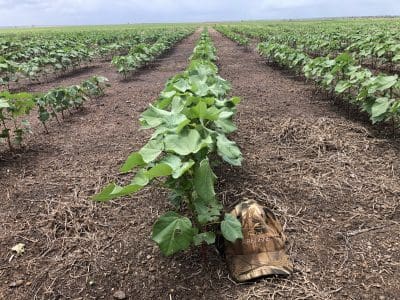 While Mr Connolly was tight-lipped on the 2019 yield and production prospects for 2020, he said results have been pleasing, and the outlook for this year’s crop reflects some of the lessons learned last year.

“We are on a steep learning curve, but we do think we’re ahead of the game at this stage.”

Working with a Queensland-based agronomist with extensive experience in summer cropping, Tipperary is now mulching its cotton fields to conserve subsoil moisture, and working on planting the crop at a time which can make optimum use of wet-season rain.

“Our wet comes in big rain events, and the humidity gives us a greenhouse effect, so we can get germination in 24 hours with the warm, moist climate.”

“We think the future for the crop is dryland, and we think we’ve really hit on something for the north.”

“The good-news story is we’re having a crack, we’re being somewhat successful, and we think cotton is a silver bullet for pastoralists in the north wanting to get into cropping.”

He said Top End growers were keen to have cottonseed from their own crops come back to them as a supplementary feed source for their cattle, but for now, they had no choice but to wear the cost of road-freighting bales to Queensland for ginning.

“One of the biggest hurdles we face is distance to processing.”

The RivCott gin sits between Hay and Griffith, and opened in 2015.

In consultation with Murrumbidgee irrigators who were stepping into cotton, it was designed by RivCott CEO Sam Buster.

It opened with three 10-foot stands, and space for a further two.

It achieved the target by producing 100 bales per hour working around the clock in a three-month season.

The initial set-up coped with crops ginned in 2015, 2016 and 2017, but continued expansion of cotton production in the region prompted RivCott to install the fourth and fifth gin stands in time to help gin the 2018 crop.

Mr Buster said expansion was part of RivCott’s continuing obligation to its grower-membership base, which now numbers 84.

“We’re at capacity with our current growers because what we could gin put a moratorium on us being able to accept new members.”

Now the three original 10-foot stands have been removed, and will be replaced in coming months by 12-footers, which can produce 40pc more cotton per hour than the smaller units.

“Once we install our new stands, we’ll be ready for when the drought breaks in 2021-22, and that moratorium can be lifted.” 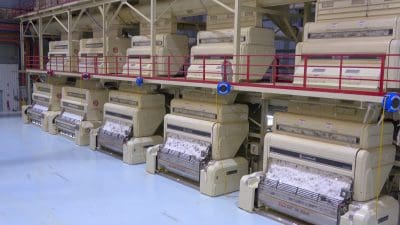 RivCott gin’s three 10-foot stands are being replaced with 12-footers to match the two on the left. Photo: RivCott

The short 2020 season will be enough to commission RivCott’s new configuration as Australia’s only single-shed gin with five 12-foot stands.

“We will use this year’s cotton to get it going.”

The Murrumbidgee and Murray regions have seen more growth in cotton production than any other in Australia in recent years.

Forecast to yield 133,340 bales from 12,782ha, it reflects the severity of the drought and zero irrigation allocations.

The Lachlan Valley is this year expected to produce 38,880 bales from 3240ha.

Along with central Queensland, southern NSW is the only established cotton-growing district in Australia to have all its gins opening in 2020.

Other operators are Auscott at Hay and Southern Cotton at Whitton, also both opened in 2015, and Namoi at Hillston in the Lachlan Valley.

Southeast of Carrathool at Coleambally, Southern Cotton and Queensland Cotton are planning to build a joint-venture gin, though not in time for this year’s crop as originally proposed.

Plans for the new Whitton Malt House, which will be powered by trash from the Southern Cotton gin, are also forging ahead.