Record global cotton consumption; stocks up, except in China: USDA

WORLD cotton consumption is forecast to reach a record level of just over 125 million bales in 2018/19, while world ending stocks are forecast to be down slightly on the back of a contraction in China, according to the latest report from the United States Department of Agriculture (USDA).

China’s ending stocks are forecast to fall for the fourth consecutive year and be less than half the level seen in 2014/15.

However, stocks outside of China will increase for the third year in a row and reach a record at just over 50 million bales.

Ending stocks are forecast to increase in nearly all major producing and consuming countries as global production remains high relative to consumption.

The USDA says continued reserve sales and strong consumption growth in China will combine to work down stocks. 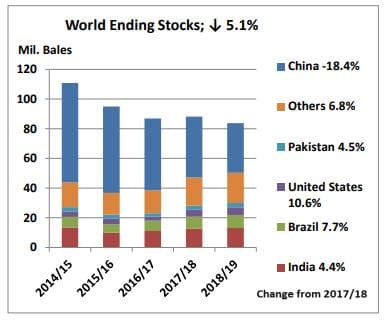 If the global consumption estimate of just over 125 million bales is realised, this will be the seventh consecutive year of growth as global textile consumption continues to recover from recessionary contractions.

Growth is expected in all of the top 10 spinning countries, with continued very strong growth forecast for Vietnam and Bangladesh in particular, two countries that have led the way in growth over the last several years. 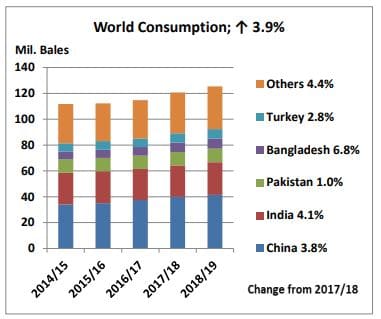 The USDA says global cotton production in 2018/19 is forecast to decline slightly. Lower production in the United States and China will more than offset increases in Brazil, Pakistan, and others.

The decline in US production is due to higher forecast abandonment given ongoing drought conditions in the Southwest.

World exports are forecast up over 4.4 per cent. Trade will be up in nearly all exporting countries, although in many cases not enough to offset higher production.

With significantly higher exportable supplies, Brazil, West Africa, and Australia will capture a majority of the increase.

World imports are necessarily up by a similar amount as exports. In particular, China is expected to allow considerably more cotton imports in 2018/19 than in recent years, implying a loosening of the import control regime.

Import growth in Vietnam and Bangladesh is expected to continue alongside rising mill use.