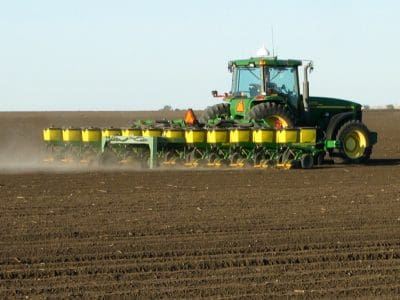 50 new growers are planting cotton in the Murrumbidgee Valley for the first time this year. Cotton planting picture courtesy of Cotton Australia

A 56 per cent surge in planting could see the southern crop emerge as the biggest cotton growing area in Australia this season.

Early figures show planting intentions of a massive 89,000ha sown in the Lachlan, Murrumbidgee and Murray Valleys this season, well up from the 57,000ha sown last year.

And cotton is edging out perennial favourites of rice and maize as irrigators strive to earn maximum returns per megalitre.

The southern cotton crop is on track to produce one million bales this season.

Cottoninfo southern NSW regional extension officer Kieran O’Keeffe said the Murrumbidgee Valley was the biggest contributor to the lift in cotton area planted in the south.

About 66,500ha has been sown, with 50 new growers planting the crop for the first time this year.

Another 18,500ha has been sown in the Lachlan Valley, while in the far south of NSW, about 4000ha of cotton has gone in including some at Finley, NSW, which is rice-growing heartland.

“Potentially, the south could be the biggest cotton producing region this season,” Mr O’Keeffe said.

‘No other crop comes near it when you look at returns’

Profit is driving the move into cotton as “no other crop comes near it when you look at returns,” he said.

The transition for some farmers who were already row croppers has been easier than for those who only grew cereals or rice, but all newcomers are attracted to cotton by the potential profits.

Mr O’Keeffe said the vast majority of the cotton was now sown with limited areas of replanting still to be completed.

A tour of paddocks this week showed many crops had 11-12 plants/square metre, which Mr O’Keeffe said was ideal.

“The crops have had a good start and that is a major hurdle out of the way,” he said.

“There is a big number of new growers this year and they will rely heavily on consultants but they feel that support is there so that encourages them to have a go at growing it.”

Southern cotton gins are also gearing up for the surge in production, with the four major gins at Hillston, Carrathool, Whitton and Hay preparing to deal with bigger ginning requirements.

Southern Cotton general manager Kate O’Callaghan said the limiting factor for growing cotton in the south had been varieties, but there were some now that were better suited to cool springs. Varieties which could cope even better were still needed though to ensure establishment and early growth was strong.

And once this stumbling block had been overcome, irrigators were choosing cotton including some that said they would never grow the fibre.

‘It’s the ability to forward sell four years out, at more than $500 a bale, that has attracted irrigators to growing cotton’

“It’s the ability to forward sell four years out, at more than $500 a bale, that has attracted irrigators to growing cotton,” Ms O’Callaghan said.

“The varieties are so water efficient, using just eight to 10 megalitres/ha, so if farmers have a 30 per cent water allocation, they know they can go out and buy water based on a really good return.”

Ms O’Callaghan said the two pickers bought by Southern Cotton would be used in conjunction with one contractor’s own gear to offer options to first time or small growers who needed their crops picked.

She’s confident there will be enough pickers for the massive surge in crop size, unless the northern picking season is delayed dramatically.

And she’s also sure the three gins at Hay, Carrathool and her own at Whitton will be able to cope with the lift in production.

“This southern cotton crop has the potential for great things in the south, and if yields are 14-15 bales a hectare, can generate some good returns for growers.

“Added to this is the quality of the southern crop, with 96 per cent base grade or better for colour.

“It is an exciting time for the region to have a vibrant, growing industry.”