UNITED States cotton exports have exceeded shipments data from USDA’s Export Sales Reporting (ESR) for the first half of the 2019/20 marketing year, repeating the historical trend for each of the past six years, according to the US Census Bureau. The United States Department of Agriculture (USDA) has historically used ESR data as the basis for its end-of-year exports estimate; however, end-of-year adjustments to the US balance sheet in September 2019 changed this approach.

With this adjustment, USDA averaged ESR and US Census Bureau exports to compute the final export estimate for both the 2017/18 and 2018/19 marketing years; Census exports exceeded ESR by more than five per cent for each of the respective marketing years.

The change in USDA methodology reflects a growing and significant divergence between both export data sources. 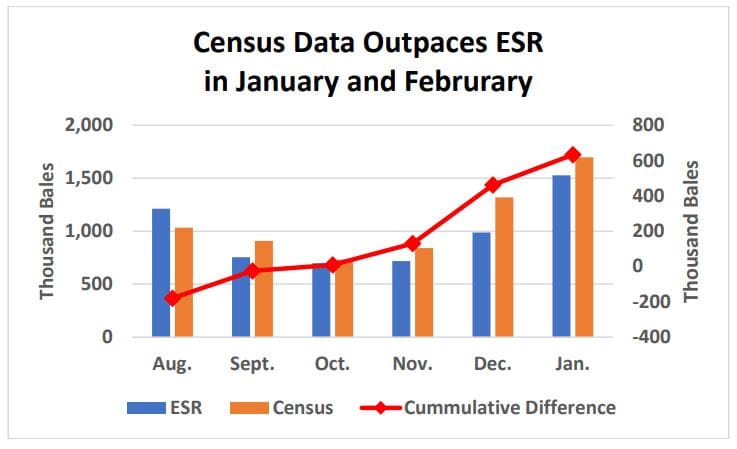 US 2019/20 exports are forecast at their highest level in 14 years, driven by the highest projected global imports in seven years and robust US exportable supplies.

A larger forecast may imply an even larger discrepancy than the previous year between ESR and Census, which exceeded 1 million bales.

Exports to Vietnam have witnessed the highest discrepancy to date for 2019/20 at more than 200,000 bales, with the top three US markets (according to ESR data) all differing by more than 100,000 bales.

Using ESR export data as the basis for both the 2017/18 and 2018/19 marketing years would have indicated an unprecedented loss (or residual).

This led to the conclusion that exports would be more accurately estimated using both sources of export data when considering the accuracy of data driving other components of the balance sheet.

With regard to justifying the discrepancy between both export data sources, lower reported ESR exports may be due to the following: exporters failing to report sales, an unclear understanding of reporting procedures, unregistered exporters in the ESR database, and/or incorrect submissions and human error.

Production is raised for Brazil, Chad, and Tajikistan. Consumption is lowered due to weaker demand in China. Global trade is up slightly with higher imports by Turkey coupled with higher exports from Chad.

The US forecast this month shows lower production and ending stocks and the US season-average farm price is lowered 2 cents to 60 cents per pound.