COOPERATION between affiliates in two states, members of Grain NSW and Queensland Agricultural Merchants (QAM), culminated in a forum in Toowoomba last Friday.

They had returned from a two-day crop tour of the Darling Downs to see for themselves the impact of the dry and hot summer.

While occasional pockets of sorghum were average, plenty were dismal.  Mung bean crops had appeared to perform well.  Cotton crops were mixed.  Day one, passing through the northern Downs town of Macalister, saw the group inspecting some good crops of millet and irrigated cotton.

Namoi Cotton trader Pedr Harvey said the group was surprised how well some of those crops were doing.  Rain had been a big factor but it was underlying agronomy that had seen the better crops across the line.

“Cotton crops that were planted early into long-fallow country have performed much better than short fallow late-plant crops,” he said.

As the tour moved south on day two, crop failure became more widespread, an apparent anomaly as Condamine River black soil to the south-east of Dalby is known as ‘safe’ country. 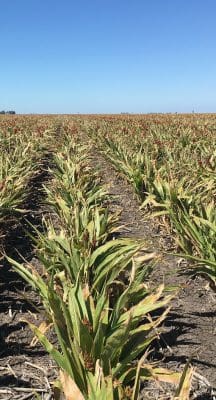 It boiled down to rainfall, those who did and did not get storms in the critical period.  Emerald Grain trader Andrew Jurgs said some of those paddocks had received in-crop rainfall of only 20—30mm.

The group members felt that around three quarters of the harvest is done in southern Queensland, though the question of crop size remained without consensus.

A straw poll confirmed unusually low planted sorghum area and unusually low grain density — though with reasonable screenings outcomes — peppered with paddocks of average performance. Harvested area is likely to reduce as this season rapidly draws to a close.

Farmarco commodity marketer Tyson Hosie moderated the group discussion as he presented a summary of the crop tour in photographs.  It was a grim picture.

How big is this sorghum crop ?

Grain Central reported potential output on low, 360,000 hectares plantings and below average 2.5 tonnes/hectare yields on 10 February link here.  Temperature conditions have been milder since then, but little else has changed. 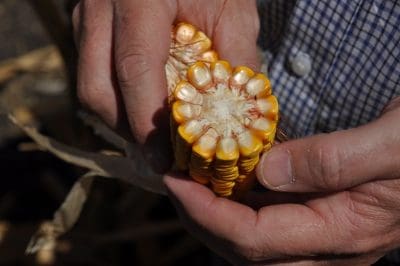 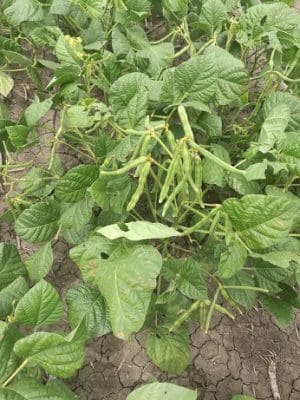 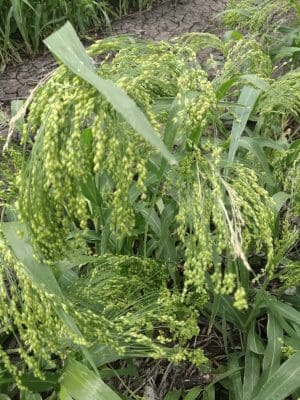