IN THE face of diminishing autumn rains, grain growers in the eastern wheatbelt of Western Australia must be open to implementing a range of on-farm improvements if they are to continue to enhance crop performance, according to a report by Bencubbin-based Nuffield Scholar, Nick Gillett. 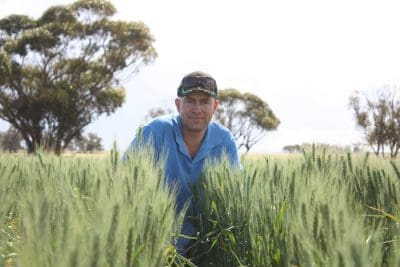 The dryland cropping region of Western Australia is a significant contributor to national grain production, but a trend of declining rainfall has meant farmers are increasingly grappling with lower soil moisture levels during the critical periods of crop germination and establishment.

Mr Gillett’s Nuffield research, supported by the Grains Research and Development Corporation (GRDC), explored incremental changes that can easily be made by farmers as they adapt to these drier conditions.

When he realised that years had passed since he was last at risk of bogging machinery during seeding, he was motivated to use his Nuffield Scholarship to research available methods to combat the challenges that drier conditions posed to the viability of his farming business.

“Uniform and timely crop establishment is absolutely critical for us, and the run of drier autumn conditions and a lack of seedbed moisture was becoming problematic for our operation. When you take a drying trend, add pressure to maintain yields and an ever-increasing cost base, it doesn’t take a rocket scientist to realise you have to adapt,” he said.

“I was keen to use the opportunity presented by the Nuffield study program to look at practices used by those in similar farming climates around the world. Travelling through the United States, Canada and the United Kingdom, as well as exploring domestic methods, I learned that while there is no silver bullet, there are numerous improvements that we can make to enhance crop establishment and performance in drier conditions.”

Farmers in the region harvest crops in a way that allows them to retain nearly the entire length of standing stubble, which acts as a snow trap and maximises water retention.

“While the ability of stubble to trap snow is not relevant to us in W.A., they have also found that the longer the stubble, the more effective it is at shielding soil from spring winds and heat. This is a benefit that would translate directly to Australian conditions,” he said.

“Handling the increased residual stubble levels would require specialised seeding machinery, but overall the system does seem to be a missing piece of the puzzle for improving moisture-related germination issues in our region.”

Closer to home, Mr Gillett’s report takes a close look at the impacts of grazing livestock on soil moisture in the eastern wheatbelt.

A widespread practice, the running of sheep and lambs can be complimentary to cropping as they present opportunities for disease breaks for paddocks, nitrogen mineralisation and weed control.

However, this practice can compromise soil quality which has flow on effects for cropping programs.

“The benefits of diversification are obvious, but there are risks involved in running livestock on cropping country. Livestock grazing can lead to loss of soil cover, moisture content and damage soil structure. This can directly impact the success of crop germination,” he said.

“For example, soil compaction from winter grazing, or grazing on damp soils, can create a poor seedbed for germination and lead to higher seeding fuel costs. None of these occurrences are catastrophic, but they do need to be factored into planning.

“The Eastern Wheatbelt of WA has a climate and moisture profile that is unique on the world stage. There is no one solution, and improvements are likely to be incremental and driven by individual grower needs and the values they place on germination.

“One thing that occurred to me as I met farmers during my Nuffield travel, was that personal well-being is crucial to success. Farming is both rewarding and risky, and it’s important to stay positive, talk to your peers and enjoy the ride.”