FTR on your radar 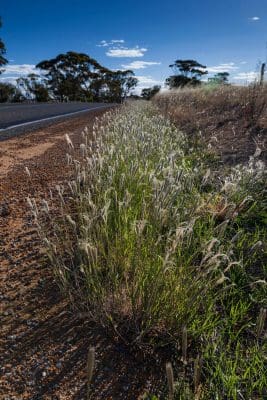 Australian Herbicide Resistance Initiative (AHRI) communications leader Peter Newman said FTR had become more prevalent in WA in the past two years, but was largely not yet on growers’ radars.

“It is really important that growers know what this weed looks like and that they act straight away to eradicate any populations from their paddocks,” he said.

“It is also necessary to find the source – which can often be on roadsides – and notify relevant local authorities so they can control it.
Mr Newman said there were currently isolated outbreaks of FTR in parts of the WA grainbelt, especially on roadsides, and it was important that the weed was not allowed to get a foothold in WA cropping systems.

“FTR is problematic as it is difficult to control – it is relatively tolerant to glyphosate, especially after early tillering.”

Populations of FTR have been confirmed resistant to glyphosate in NSW, Queensland and South Australia.

Matricaria, marshmallow and stinking lovegrass, as well as FTR, are the focus of the research led by Alex Douglas from the Department of Agriculture and Food Western Australia and funded by the Grains Research and Development Corporation (GRDC) to help WA combat emerging weed threats.

“Our understanding of the biology and ecology of these localised weed species is extremely limited and growers have been challenged when it comes to managing them.

“Information on the life of their weed seed-bank (persistence) is critical for growers to be able to develop practices to manage them.”

Mrs Douglas said that as well as providing growers with information about the biology and ecology of the targeted weed species, the project would investigate a range of practical management options.

“A range of experiments will explore the efficacy of herbicide mixtures and knockdowns applied at various times during the growing season and a series of best-practice guides will then be developed.”

“Once updated, these tools can be used by consultants and growers to further understand the impact of management decisions on these weeds.”

Click here for information from AHRI about why growers should be particularly vigilant about looking out for and controlling FTR in particular.

Research into FTR, matricaria, marshmallow and stinking lovegrass is part of the GRDC Locally Important Weeds project, which involves the University of Adelaide and CSIRO carrying out research into emerging weeds in Australia’s southern cropping region.

Information about weed management is available via the WeedSmart website http://www.weedsmart.org.au and the GRDC Integrated Weed Management Hub at http://www.grdc.com.au/IWMhub

The GRDC Fact Sheet about managing FTR says the grass is quick to mature and can produce seed heads within four weeks in favourable conditions, and that major flushes occur when good rain falls over consecutive days, particularly in spring.