A ROUNDTABLE of grain industry participants convened by the NSW Farmers’ Association in Sydney has identified some pinch points and inefficiencies in the regional NSW rail network. 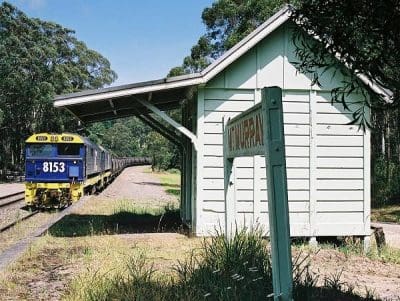 Mount Murray, inland from Port Kembla, has been identified as a pinch point which restricts rail efficiency.

A number of them are likely to be rectified under the NSW Government’s $400 million Fixing Country Rail program, for which expressions of interest on projects closes on Friday.

Fixing Country Rail has been designed to enhance rail infrastructure that eliminates connectivity constraints on the NSW regional rail network, and to reduce the cost to market for regional businesses.

NSW Farmers’ Grains Committee chair, Rebecca Reardon, was instrumental in bringing the above and below-rail operators together to develop a vision and priority investment plan which could benefit the NSW grains industry.

The cost of transporting grain to port represents over one third of production costs.

“We have agreed a high-level, future vision of a network which is free of pinch and choke points, has lowered train cycle times by a minimum 25 to 33 per cent, and increases train payload through improvements to line carrying capacity on bulk, container and branch rail lines.”

Mrs Reardon is part of a family farming operation near Moree in northwest NSW, and has worked extensively in the grain trade.

Her insight into being a producer and trader of bulk and containerised grain has helped to put NSW Farmers on the front foot as the state’s transport infrastructure prepares for some significant changes, including those coming with the Inland Rail project.

Mrs Reardon said she saw a big increase in efficiencies coming from standardisation of the tonne axle loads (TAL) to 23 on main bulk lines.

“If you can increase the TAL from 21 to 23, you can get a 10 per cent increase in your payload per wagon straight away; those are the kinds of improvements we’re talking about through line upgrades.

“On the Parkes to Narrabri and Narrabri to Moree sections, we’d like to lift the TAL to 25.”

Mrs Reardon said the Mount Murray passing loop inland from Port Kembla was a pinch point that those around the table identified as slowing train movements.

“That passing loop is only 680 metres long, and limits train length; if we changed the wagon payloads from 21 TAL to 23 TAL, and extended that loop, we could be putting 4000 tonnes of grain on a train instead of 2200.”

“Choke points like this are clearly having a detrimental an effect on capability. One of those is at Merrygoen, and if we could fix that, you’d save six hours on a round trip to Newcastle.”

Mrs Reardon said some improvements to the NSW regional rail network had already delivered benefits; they included the upgrade of the Narrabri to Moree line from 21 to 23 TAL which had enabled trains travelling from Moree to Newcastle to carry 3500t instead of 2200t of grain.

As well as considering upgrades to lines to enable heavier axle weights, and the building or augmenting of passing loops, Fixing Country Rail will also consider projects which will open disused rail lines, or build sidings.

“John Holland, ARTC and Country Rail Connections will all be putting in projects, and Transport NSW will assess them; we are trying to steer it so they look strategically at where we can get the best value and the most improvement.

“NSW Farmers is not saying we’ll give a letter of support here and there; we are looking at the whole state.”