INDIAN demand for Australian wheat is set to withstand supply-side pressure from its own crop now being harvested, and an import tariff which the Indian Government is expected to reintroduce by early April.

That’s the opinion of trade sources, who expect the Indian Government to reinstate a tariff on imported wheat to encourage local buying of the Indian wheat crop estimated at more than 90 million tonnes (Mt).

“Even if Australian wheat incurred a 10 per cent import tax into India, we would still be competitive on ASW,” Market Check head of advisory, Richard Perkins, said.

In recent years, India has been a market of generally insignificant volume for Australian wheat exports, but since October last year, it has imported 1.5Mt of Australian wheat to help compensate for a shortfall in domestic production. 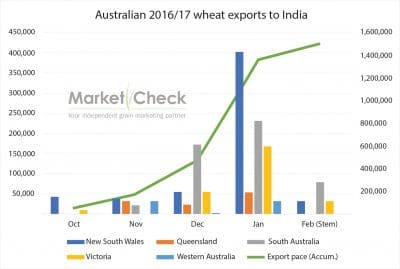 India’s wheat imports from Australia were 1.5Mt by February (green line, right axis cumulative total) since the start of the marketing year in October; the shipment quantities by month from each state are shown (bar chart, left axis). (Source : Market Check)

Trade sources say much of that tonnage has already been bought, with Ukraine the supplier of up to 3Mt when India temporarily relaxed its requirement for methyl bromide fumigation last year, a move which has since been reversed.

That puts Australia in the box seat as a supplier to India until August at least, and beyond if the fumigation-at-origin requirement stands.

Buying interest is expected to rekindle in May or even April, when the trade has a handle on the size of the Indian crop and the import duty.

“They might take another 1 or 2Mt of old-crop because Australia is the only exporter that can fumigate at origin with methyl bromide,” one trader said.

In the past nine months, India’s tariff on wheat has been set at 15pc and 10pc before dropping to zero in December in response to dwindling domestic stocks.

Traders expect a similar scenario may play out this year.

Favoured in the south

“It’s still going into ports which would have to drag it from north to south in India at a greater cost than they have to pay to  import directly from Australia,” Mr Wilson said.

As wheat in India is primarily used to produce flat breads, ASW and APW of around 9-10.5 per cent protein are the preferred grades.

“Most buyers are looking for a sound milling wheat, but there is some demand from people wanting to make volume loaves that require flour from higher-protein wheats.

Mr Perkins said the ASW discount to APW across the east coast of Australia has halved, rallying $15 since the end of January, with Indian demand being a major supporting factor.