SORGHUM is continuing to trade at about $50 per tonne below feed wheat as traders try to get a handle on the strength of prospects for getting a big area of spring-planted sorghum in the ground. 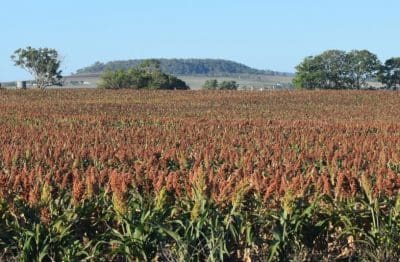 Fuelling hopes for a crop to supply the domestic stockfeed market from March onward are storms and showers now active over the growing areas, but the patchiness of the rain has many traders scratching their heads about the direction of domestic feedgrain pricing.

In his latest report, broker Andy Cunliffe said Queensland grain values felt like they had reached a zenith.

“The trade knows there is time to plant a sorghum crop; as long as we have this opportunity, it will hold the reins back on the wheat and barley market.”

Sorghum has been trading at a $50/t discount to feed wheat since August, and if the feed wheat price kicks again, it is likely to stimulate demand for current-crop sorghum, which is still finding its way out of silos on price spikes.

Trade sources said end users like feedlots, piggeries and poultry farms on the Darling Downs of southern Queensland were likely to stick with wheat if its values did not exceed $340/t for January delivery.

While not historically cheap, it is working its way up from southern NSW, Victoria and South Australia in sufficient volume to satisfy demand.

Much of the Darling Downs country fallowed over winter is 30-50 millimetres of rain away from a sorghum planting this month.

Sorghum on the central Downs, the epicentre of the Australian crop’s production and consumption, is ideally planted from now until early November.

Prior to last week’s rain, sorghum was trading at more than $300/t for new-crop delivered March, but prices are now back below $290/t, not enough to entice any forward selling from growers concerned about planting prospects.

“The feedlot guys say they are happy to use sorghum at 15 per cent under wheat, which fits in with its $50-$55/t discount, especially when the availability of wheat is going to be pretty skinny, and if we do get a good sorghum crop it will be on their doorstep,” one grower said.

Clouding the prospects as to whether to start pricing sorghum into feed rations from March onward is the lacklustre outlook for much of the wheat and barley planted on the plains and outer slopes of NSW.

“A small winter-crop size is set in stone now right through NSW; I’ve talked to guys in northern Victoria, and they’ve no doubt lost the cream off their crop already.

“The dry has been slipping south all season; it is just a matter of how far south that slips south.”

A broker said sorghum values have rallied to mirror international wheat price moves, and have risen and fallen on rain, either forecast or actual, in Australia’s sorghum-growing areas.

“All this toing and froing gives us very little semblance to market activity,”

Whether or not China enters the market for Australian new-crop sorghum is another factor for the Australian market to consider.

“At some stage, you have to decide whether China’s coming in or not coming in,” a trade source said.

Around one million tonnes of Australian sorghum was shipped to China from the 2016 harvest, and this demand meant sorghum traded at a premium to wheat for the entire season,

“The next year, China decided it had to use its stockpile and bought none, and this year now if we plant a crop, there’s no idea whether China will participate or not.

“Against those odds, it is not a very fun market.”

Another trader said sorghum at $280/t delivered Downs in March/April looked like being $65/t below wheat, and that spread meant that those calculating inputs for feedgrain rations were likely to consider increasing its use in the ration.