THE 2016 cropping season is presenting southern grain growers with a unique set of opportunities and challenges, according to the Grains Research and Development Corporation’s Southern Regional Panel, which has completed its annual spring tour. 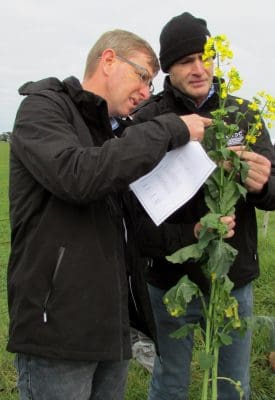 Panel chair, Keith Pengilley, said despite low prices for cereals, a high degree of positivity was permeating the southern cropping industry on the back of significant growing season rainfall which has promoted high yield potential.

“In the past when seasons have been good, we generally haven’t seen such levels of positivity. People in the grains industry are generally risk averse and rightly so, given the dry years we’ve experienced,” Mr Pengilley said.

“But this year, the mood is generally buoyant. Hopes are high for bumper yields and hopefully these will counter low grain prices. I expect that when we balance out yields and prices, most growers will achieve an average year, and that’s what we need after two failed years.”

Mr Pengilley said further substantial falls of rain occurred during the tour, especially in areas such as the Victorian Mallee where the rain was needed.

“The rain has fallen at the right time – during early grain-fill – providing crops with a massive boost. It’s the year growers needed to have, particularly in those areas which have just come out of two dry seasons.”

Mr Pengilley said growers would be looking to extract as much as they could out of the season to offset low grain prices.

“In lower rainfall areas, this could be one of the two years in 10 where growers need to make massive profits to keep their system going for the next 10 years. It’s just unfortunate returns per tonne this year won’t be high,” he said.

“It’s therefore important they make every dollar a winner and so they must be equipped with the skills, ability and resources needed to push the envelope when conditions are favourable, as they are this year.”

Mr Pengilley said the seasonal situation observed by the Panel in Victoria was mirrored elsewhere in the southern cropping region, including Tasmania and South Australia.

While most growers have welcomed the wet conditions, above-average rainfall has created agronomic issues in parts across the entire southern region.