HARVESTING operations in Central Queensland (CQ) have been hit with a spate of header fires, particularly in machines stripping heavy chickpea crops. 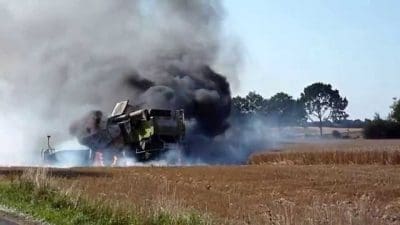 Growers are warned to take precautions against header fires this harvest.

As the harvest nears completion around Clermont and the peak moves south of Emerald, there are widespread reports of headers catching alight.

Most have been put out before causing significant damage, but some headers have had to have bearings, separator doors and electrical wiring replaced, while a couple of machines have been burnt out altogether.

Many growers are having to blow down their headers after four or five bins to keep on top of the fire threat.

Chickpea crops are particularly liable to cause fires because of the high dust load, the heavy crop and high acid content this year, and the need to cut the crop close to the ground, creating the risk of the cutter striking rocks and causing sparks.

Conditions in the lead up to chickpea harvest were dry, so there wasn’t the rain at the end to wash the acid off the plants.

Fire risk aside, Queensland Department of Agriculture and Fisheries principal technical officer, Maurie Conway, Emerald, said CQ farmers were reaping the benefits of one of the best chickpea crops in years with many averaging over 2 tonnes/hectare and some as high as 3t/ha.

“They are fabulous crops. The yields are just right up there. It has put a smile on growers’ faces,” he said.

Mr Conway said the only downside was a high incidence of mould on the grain which had developed in-crop in earlier wet conditions.

Rainfall last night of up to 15 millimetres in some areas of CQ temporarily halted harvest but headers are likely to be rolling again this afternoon.

Many of the pulse crops come with an increased fire risk because of certain characteristics of the residues. For example, chickpeas have high concentrations of malic and oxalic acid exuded from the fine leaf hairs, which causes the residues to stick together inside the header. This can lead to buildup of fine particles that are extremely combustible.

Lentils also have a very fine residue that can stick to the header and to dust particles. In addition lentils bear the pods very close to the ground so the pick up comb needs to be lowered and can easily strike a rock, causing sparks to ignite the fine powder.

Peas, lupins and faba beans also have fine residue that powders easily and creates higher risk of ignition. Advice from Canada suggests that diseased crop leaves are a higher risk of fire at harvest.

When harvesting these crops more regular clean downs with a high pressure air compressor are required. In lentils or chickpeas this may be as often as each stop at the chaser bin.