Herbicide resistance on the march in the north

THE extent of glyphosate resistance in both ryegrass and sow thistle is much higher in the northern cropping region of New South Wales and Queensland than in other regions of NSW, according to a recent weeds survey. 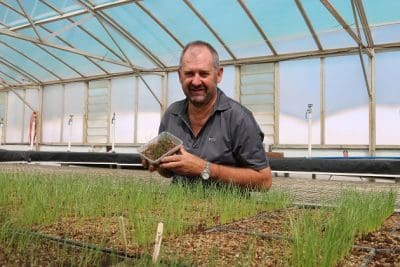 However, Dr Broster said the good news was that the level of resistance in ryegrass to group A fop, group B and group D herbicides was much lower in that area than in the remainder of NSW.

The first-time survey of the region was conducted prior to harvest in October and November 2016 by CSU and Queensland Department of Agriculture and Fisheries.

The ryegrass samples were screened to eight different herbicide groups with resistant populations found to six of these (Table 1). Dr Broster said the ability of much of the northern region to grow both winter and summer crops, combined with the use of fallow in the off‐season, placed high selection pressure on the herbicides used in the fallow phase.

He said with ryegrass present in the winter fallow in some of the region and mostly sprayed with glyphosate at that time the higher level of glyphosate resistant ryegrass populations was to be expected.

“The take home message is that glyphosate is our most important herbicide and resistance development should be considered whenever you use it. We have to maintain the ability to use that herbicide,” he said.

“We have to remember that every time we use herbicide we are selecting for herbicide resistance.”

The survey found the level of trifluralin resistance in ryegrass was much lower in the northern region than reported for the remainder of NSW and across Australia.