The warning comes from Elders agronomists who have been monitoring cereal crops in the wake of Australia’s first known outbreak of Russian wheat aphid this season, with some crops showing damage levels as high as 30-40 per cent.

While Russian wheat aphid (RWA) is commonly found in grain crops around the world, the pest was first detected earlier this season in cereal crops at Tarlee in the lower mid-North of South Australia.

Since then, the aphids have spread so quickly they can now be found in every cereal crop from the Adelaide Hills to Mildura, according to Elders senior agronomist at Loxton in SA, Brian Lynch.

Across the border, RWA has been found in crops in the Wimmera, Mallee and central Victoria as well as southern NSW, and appears to be more prevalent in wheat and barley than triticale and oats.

“As the season has progressed, our advice to spray crops with low levels of RWA infestations early in the season has proved to be correct, as the heads of untreated crops are white and bleached, with damage levels as high as 30 to 40 per cent,” he said.

“Crops where the seed was treated with imidacloprid look to be faring far better, pointing to the management practices we’ll be recommending to our clients next season.”

Mr Lynch explained that RWA injects toxins into the plant while feeding, causing leaf rolling, purple to red streaking on the leaves in cooler weather and white streaking as the weather warms up. 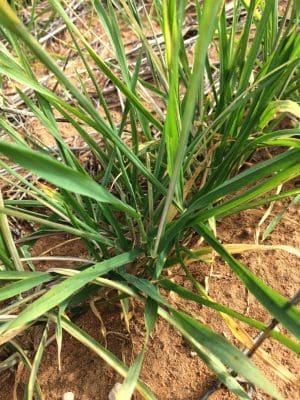 “The damage first appears as patches of stunted, pointy tipped plants which may appear similar to rhizoctonia, with tightly rolled leaves and a general loss of colour across the affected crop,” he said.

“Later on, the wheat awns become trapped by the rolled leaves, resulting in hook-shaped head growth, bleaching and reduced yield.”

Meanwhile, advice for identifying, monitoring and managing RWA has been high on the agenda for Elders agronomists at meetings, field days and other events this season, to minimise its impact on farmer clients.

“At every opportunity, we’ve been alerting our clients to the problem and ensuring they take the necessary steps to protect their crops, even though we don’t yet have all the answers to manage RWA,” Mr Lynch said.

Applying the lessons from this season to 2017, Mr Lynch said treating seed with imidacloprid and early crop monitoring will be key steps for managing RWA.

“Protecting crops through to head emergence gives them a good start and we’ll lean towards pirimicarb instead of chlorpyrifos to maintain beneficial insects,” he said.

“Elders’ genetics program includes cultivars which are showing resistance to RWA, so our Technical Services team will be conducting research trials with these in 2017.

“Access to cultivars with built-in resistance will equip growers with another tool to manage the threat posed by RWA.”

Elders national technical services manager, Graham Page, said this season’s RWA outbreak emphasised the importance of biosecurity and the need for vigilance by agronomists, farmers and the industry at large.

“With yield losses in the vicinity of 30 to 40 per cent, everyone needs to be monitoring crops,” he said.

“The industry authorities are applying the knowledge they have at hand, but we recognise that Australian conditions are unique and there’s still a lot to learn about managing RWA.”