Lentil harvest kicks off in Mallee/Riverina

HEADERS are moving through the first of this season’s lentil crops in Victoria’s northern Mallee and NSW southern Riverina where conditions have been ideal for producing average to above-average yields. 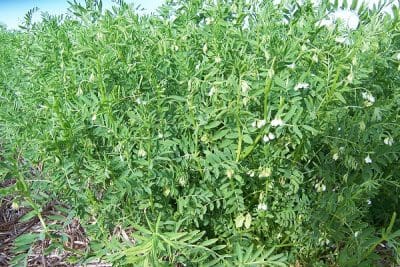 While harvest began on the earliest crops a week ago, a vicious storm that ripped through the Mildura region last Friday night not only wreaked havoc on the city and surrounding horticultural enterprises but also brought grain harvest to a halt.

The headers began rolling again yesterday and, with hot weather predicted, should be in full swing over the next week.

All-AG Consulting and Technical Services senior consultant, Rick Rundell-Gordon, Swan Hill, said there were some impressive yields in the lentil crops that had been coming off in the northern Mallee.

“If people have implemented fungicide strategies correctly, crops are going upwards of 2.5 tonnes/hectare. Normally in the Mallee we would expect 1.0-2.0t/ha,” he said.

“At the moment lentils are returning around $720/t delivered, we broke new ground last year with top prices, but $720/t is the normal high price, so it is a good result for everyone.”

In the southern Mallee a substantial area of crop has been lost to waterlogging and disease.

Harvest is yet to get underway in the Wimmera.

“They have had a bit of damage and disease, mainly ascochyta and also botrytis, and there have been issues with them running out of fungicide in some areas,” he said.

“Most growers are to the point where they are starting to desiccate the crops to stop the pods from shattering.

“Harvest will progress through the Wimmera in Victoria and across to the Yorke and Eyre Peninsulas in South Australia where they have some fantastic crops. We expect normal yields of 1.5 to 2.0t/ha with some higher than that.”

However, Mr Bowden said the picture was not so good in parts of southern NSW where flooding in late September had destroyed some big lentil crops around West Wyalong and through to the Victorian border.

“I know one grower at West Wyalong who had 1000 acres of lentils that have been flooded and he won’t harvest any of those. But he did very well out of them last year, so swings and roundabouts.”

The weather has been really good for the past month.

We are expecting a hot week coming up which will bring things on fairly quickly.

Ninety-nine per cent of lentils are exported to the India, Bangladesh and Pakistan markets.

The prices are good. The big risk is production risk, not price risk. The yields are uncertain until you get the header into it, so most people would forward sell a very small portion of the crop and then wait to see what harvest brings before they sell the rest.

Agriculture Victoria pulse agronomist, Dr Jason Brand, said pulses such as lentils were offering growers agronomic and economic benefits and their worth was being realised by more and more growers, especially in non-primary areas of production.

“For example, the Wimmera has been the primary area of production of lentils in Victoria, but in the last 10 years we have seen expansion into the lower rainfall southern Mallee,” he said. 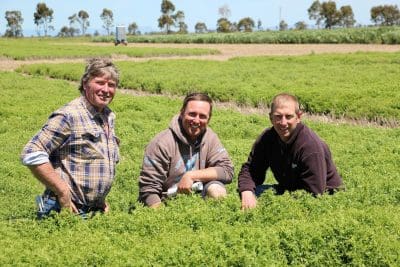 “Most of the lentil varieties currently being grown have been released in the last five years,” he said.

“The recently-released herbicide-tolerant variety PBA HurricaneXT already makes up 40 to 50 per cent of overall production in southern Australia, and on the Yorke Peninsula in South Australia alone that figure is about 70pc of production.”

Dr Brand expects the high-yielding, large red lentil PBA Jumbo2 to be the next dominant variety, given its excellent disease resistance.

“I wouldn’t be surprised if a lot of growers switch to PBA Jumbo2 next year – if seed is available we could see it making up 30pc or more of next year’s overall lentil production in Victoria.”

The Arnolds sow half of their cropping area to pulses and one-third to lentils alone, and despite the disease pressure brought on by a wet growing season, their legumes “are out of the box” this year.

Herbicide tolerance and weed ecology, particularly in terms of agronomic management, are among the areas of focus for the ongoing Southern Pulse Agronomy program which, over the next three years at least, will also continue to work on disease management traits.

“We will be looking at traits for management of blackspot in field peas, ascochyta blight in lentils and chickpeas, as well as botrytis diseases in faba beans and lentils,” Dr Brand said.