SOYBEAN growers across northern NSW and southern Queensland can boost yield, crop security and income by switching to the new variety, Richmond, next season. 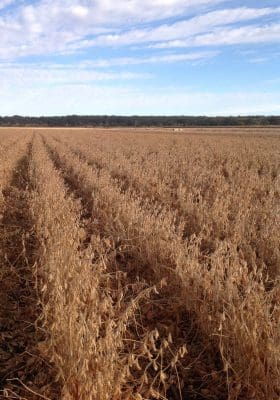 NSW Department of Primary Industries (DPI) research agronomist, Natalie Moore, said a comparison trial of the new soybean variety, Richmond, against the familiar variety Asgrow A6785 showed that growers could achieve a yield increase of 7 per cent with Richmond as well as higher prices for the grain.

“Results from a replicated trial showed that Richmond outperformed A6785 in grain quality, seed size, tolerance to lodging and ease of harvest whilst returning $397 per hectare more to the grower than Asgrow,” Dr Moore said.

First released in 2013 the Richmond variety is a high yielding, clear hilum, high protein replacement for A6785, Manta or Soya 791, with great weathering tolerance.

This is a very valuable trait in the NSW north coast region to prevent yield and quality losses due to heavy rainfall at harvest time during April and May.

“Richmond was evaluated at the NSW DPI research facilities at Grafton and Narrabri and has performed exceptionally well in just the second year of commercial production,” Dr Moore said.

“It is adapted for early season sowing in production areas from the Liverpool Plains, northern Tablelands and Slopes, and north coast of NSW and into southern Queensland.

“Soybean is a vital component of many farming systems in NSW including sugar cane, where a soybean rotation boosts the yield of the following cane crop by over 10 per cent compared with a bare fallow. Soybean is also part of summer and winter grain production systems, as well as beef and dairy systems.

“Soybean growers are encouraged to place their orders early for Richmond seed supplies to avoid missing out for the coming season.”

The Australian Soybean Breeding Program is a co-investment by NSW DPI, CSIRO and GRDC. The Grafton node of the program is located in the north coast region as it is the single largest soybean growing area in Australia.

Varieties released by the Australian Soybean Breeding Program are supported by the Northern Pulse Agronomy Initiative and the Coastal Grower Solutions Project through co-investment by DPI and GRDC.