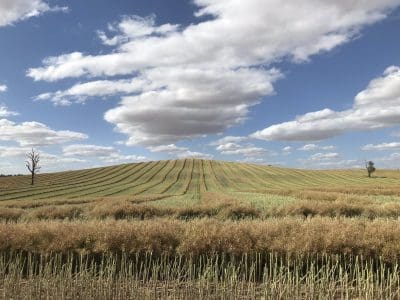 THE AREA of canola now being harvested in New South Wales looks like being roughly half what was planted, following a widespread grazing and hay-cutting program which reflects the value of fodder for sheep, and a tough end to the season.

In July, the Australian Oilseeds Federation (AOF) forecast NSW’s canola crop at 429,000 tonnes from 390,000 hectares, and the organisation’s updated estimates due out this month are expected to roughly halve both figures.

Canola hay is being stored or fed on-farm, or sold on to the NSW tablelands, where graziers are now covering their input requirements out as far as April.

“Barley prices have fallen by maybe $100/t since last year, and barley might be worth holding on to and putting into lambs, so it looks like canola is what they want to sell now.”

Mr Herbert said of the 1000t of new-crop canola delivered to ROBE as of Wednesday, oil content had averaged 41pc and up to 44pc, an excellent result given the tough season.

“Improved varieties and farming practices are surprising us with the yields and oils.”

Helping the quality of the canola now being harvested in NSW is the fact that poor crops have been taking out of the equation through grazing or hay-cutting, which is now complete for most growers.

“Crops that were poor went into a bale, so the quality profile of the crop will look a bit better.”

“In general, people have been reluctant to sell before getting the header in; they’ve wanted to see what their yield and oil were like.”

Supporting canola prices are oil and meal values, with meal being underpinned by unwavering drought demand from sheep and dairy and beef cattle. 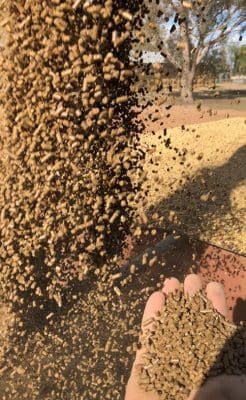 The market has prompted ROBE to develop a pellet which Mr Herbert said absorbs around 5-10pc of the plant’s meal.

“There’s good potential for meal exports, but the domestic market is so strong that it’s taking everything.”

Helping to fuel demand for canola meal has been the closure last year of Cargill’s plant at Narrabri, the only dedicated large-scale cottonseed-crushing facility in Australia, due to difficult terms of trade.

Mr Herbert said beef feedlots in northern NSW and Queensland have made significant changes to their rations also because of whole cottonseed prices being high and in limited supply.

They are now looking south for meal to put into rations, particularly with another even smaller cotton crop likely next year.

“Historically, we’ve had demand for our meal in the Riverina, but in the past three or four months, it’s been working its way north too.”

A tough season, coupled with high lamb prices, has seen plenty of crops on the central slopes grazed out since August.

NSW Department of Primary Industries Orange-based technical specialist pulses and oilseeds Don McCaffery said farmers have opened the gate on canola crops for their own stock, and also to earn agistment income.

“Around Wellington, the whole lot’s been grazed out.”

“It’s still an area of conjecture as to how much has been cut for hay or grazed out in all districts, but the numbers are big.”

“There is the odd good crop around Coolamon, Marrar and Junee, but you really have to go south to Henty and Culcairn before things look good,” he said.

Agfarm southern NSW account manager Matt Noonan, Wagga Wagga, said some irrigated canola from as far west as Hillston, and some dryland tonnage also, was hitting the market, but volume would not be available until next week.

“A lot has been sitting in windrows for the past week, and then it rained, so harvest will pick up next week.”

“Considering the season, some of the yields we’re hearing have been pleasing, and that’s where growers might want to get their early cashflow.”

With barley bids at some sites dipping below $300/t, trade sources including Mr Noonan said growers were not inclined to sell cereals.

“Barley is available now, and a lot of wheat will make its way into the system, but it’s not as easy to get growers to sell without a ‘4’ in front of the numbers.

“If they can get $600 at the site for canola, or a little bit better into the crushers, they might take it.”