PATCHY RAIN in the past week will be enough to get the winter-crop sowing program under way across much of the NSW grainbelt. More rain, particularly on plains country, is needed to fill in the gaps and set up solid prospects for chickpea and spring wheat crops. 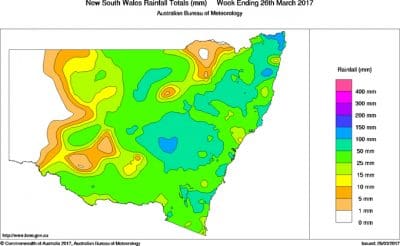 While the price outlook for cereals remains flat, dual-purpose varieties are likely to be the first crops planted as producers look for grazing options to support strong sheep and cattle prices.

The early break augurs well for a big canola area, as already indicated by a shortage of seed.

With the tail-end of Tropical Cyclone Debbie now in the forecast mix, growers in the state’s north are hopeful of significant rain in coming days to bolster subsoil moisture and buoy planting prospects.

Agronomists across the state said the first task for many growers will be to spray out weeds now germinating, an opportunity which failed to materialise in the hot and dry summer.

IMAC Forbes consultant, Cameron Cork, said last week’s falls of up to 150 millimeters meant some growers in the central west were three to four weeks away from starting their 2017 winter-crop sowing program.

“Growers on the heavier country have still got moisture from the floods last year, but in other areas people will be able to get going in two weeks. Any further rain this week will delay that,” Mr Cork said.

Mr Cork said growers in the central Lachlan Valley were likely to start their seeding programs with winter wheats, forage oats and some forage barley before moving into canola and main-season wheat.

He said growers needed to get on top of summer weeds like Paterson’s curse and capeweed, and winter weeds like ryegrass and barley grass which would all be germinating at the same time on the recent rain and warm conditions.

“If growers can hold off on sowing until they get a good clean-up of weeds to minimise the risk of diseases like wheat streak mosaic virus, we’ll be right,” Mr Cork said.

B&W Rural Moree agronomist Sophie O’Neill said growers, predominantly to the east of Moree, got at least 70mm of rain in the past week.

“Those growers are well set up for a winter crop, and there is more rain forecast for the region including Mungindi, which only got a few millimeters last week. It’s definitely a start.”

Ms O’Neill said canola, oats and some faba beans were likely to go in on this rain, followed in May by barley, wheat and chickpea.

She said many growers west of Moree still needed significant falls as the soil profile was dry down to 50cm following the extremely hot and dry summer, and chickpeas were looking like a preferred option for growers.

Moree-based agronomist, Bruce Crosby, said over the past fortnight, most growers have had 50-100mm of rain, but following a very hot and dry summer, most paddocks’ moisture profiles were still only around one quarter full.

“Most people have enough surface moisture to start now, and with more rain forecast for Thursday, that might be enough for the crop for maybe two months,” Mr Crosby said.

He said based on price outlooks, growers were keen to plant “anything other than wheat and barley”.

“All the canola seed will be sown that’s available, and we could have sold another 40 per cent on top of that it more was available.”

Mr Crosby said growers should think about dressing cereal as well as pulse seeds to minimise disease risks, and get on top of weeds prior to sowing.

“In a year like this, you’ve got to break that green bridge to disease, and even cereals need dressings with fungicides.”

Grain Orana Alliance CEO, Maurie Street, said the wider Dubbo region has had more than 100mm in places from recent storms, but less in most places.

“It’s been very variable, but everybody has probably got enough to get a start,” Mr Street said.

He said one or two knockdown herbicide applications were likely to be top priorities for many growers once weed seeds which have been dormant over the hot and dry summer germinate.

“This early rain means you can get a good handle on weeds.”

He said slopes and plains growers will open their planting programs with dual-purpose wheat, followed by canola.

“If you’re not going to graze it, planting canola earlier than mid-April is a bit risky in terms of diseases like sclerotinia and blackleg.”

As is the rule of thumb for much of NSW, Mr Street said main-season wheat would not be planted prior to Anzac Day, and many areas were in need of more rain prior to provide a solid start for the crop.

In Cootamundra, Landmark agronomist, Mark Golder, said the past week had brought handy falls of 30-60mm to much of the southwest and southern slopes.

In Griffith, AgGrow agronomist, Barry Haskins, said some “very patchy” rain of up to 50mm had fallen south of Lake Cargelligo, but nearly all areas needed rain prior to the opening of the planting window in late April.

According to the NSW Department of Primary Industries (DPI), almost 70 per cent of NSW received below average rainfall during February, the third warmest on record.

“Many parts of the state experienced their driest February on record, with areas of western and central NSW receiving little or no rainfall,” NSW DPI seasonal conditions coordinator Ian McGowen said.