PROLONGED wet conditions and high canola prices have sparked a run on aerial sowing of the valuable oilseed on the plains of central and north-west New South Wales.

Heeding the call has been Armidale business Superair, which had two of its five aircraft and pilots Chris Bennett and Ryan Matheson based at Trangie for three weeks aerially seeding canola.

Superair CEO David Boundy said the spreading of single super for a client base spread from Newcastle to Stanthorpe normally accounts for 95 per cent of Superair’s work.

“The only reason we could spare the time was that the New England was so wet and we can’t get on to ag airstrips,” Mr Boundy said.

“We work off 700 different airstrips, and they were all too wet.”

Mr Boundy said every eight or so years, Superair will get a call from another aerial spraying outfit asking if it can assist with workload.

“This year we had seven operators from Goondiwindi to Cootamundra approach us.”

“We normally don’t go into Warren or Trangie, but people were desperate.”

Superair’s initial call to the plains came from Terry Wyatt, a client with grazing country at Guyra, and who is based at Collie.

The Wyatts had conventionally and successfully sown 1000 hectares of canola on their Warren farm in early April, and had plans to sow 1900ha at Collie before 300 millimetres of rain fell in March and April.

“We realised there was no way we were going to get it in by the conventional way,” Mr Wyatt said.

His earlier experience of using a contractor to fly on wheat treated with mouse bait at 1kg/ha gave him the confidence to look at aerial sowing of canola.

“We canvassed far and wide and realised Superair had the right equipment to do it.

“We had the seed, the time was running out, and with the price of canola, it was a small risk for a good return.”

The intended area was planted and while most of it established successfully, 600ha was resown on Friday after getting a destructive 50mm of rain straight after planting.

While mice were not a problem this year, ants and crickets were.

Ants carried off some of the canola seed flown on to country coming out of pasture, while crickets ate seedlings in heavy stubble.

However, Mr Wyatt said the results have been solid enough to warrant reconsideration even in drier years, and he is now looking at engaging Trangie company Rebel Ag to fly on wheat ahead of rain if it shows up on the forecast in the next 10 or so days.

If not, durum will be planted into July, hopefully when the soil has dried out to allow ground access.

The fitting of meterate units enables lightweight product such as pasture seed, grain treated with mouse bait and granular herbicide as well as canola seed to be broadcast. 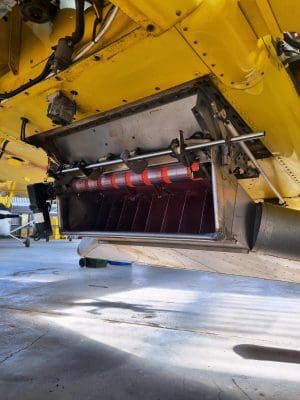 A meterate unit is attached to two of Super Air’s aircraft to enable them to broadcast lightweight loads like canola. Photo: Super Air

“They bolt underneath the aircraft and a computer controls the rate, which can be manually varied also,” Mr Boundy said.

While single super is spread at around 125 kilograms per hectare, canola is more like 2-3kg/ha.

“With some work from Trangie, we were seeding 45km away from the airfield; that wouldn’t work at 125kg/ha, but at 2-3kg/ha, one load goes a long way.”

Rebel Ag director Rebecca Ashby said the business called on Fred Fahey Aerial Services from Cowra as well as Superair to help service growers who were unable to use their ground rigs to finish planting at the optimal time.

“We’ve sown canola and we’ve done quite a bit of wheat where people can’t get on to their country,” Mrs Ashby said.

“The window’s closing for these farmers…and even just a millimetre or two of rain is enough to stop them from planting because the ground’s so wet.”

Rebel Ag has also been defoliating cotton, and is now spraying herbicide and fielding inquiry for spreading urea.

A little canola and some wheat has been sown aerially in north-west NSW and southern Queensland in districts including Walgett and Toobeah.

Fred Fahey Aerial Services principal Rory Fahey said the company sent one plane and pilot to Trangie to sow canola and wheat, a practice it usually does much closer to its base at Cowra in wet years particularly.

“We’re starting early, because it’s been so wet and a lot of crops are nutrient deficient.”

On the Western Downs of southern Queensland, Keyland Air Services pilot Frank Drinan said the company has flown in some winter cereals around Dalby, Tara and Condamine.

However, the call has dropped off now that rain has eased.

In central NSW, AgriWest Peak Hill agronomist Ben Wilson said word was that a couple of people in the wider district had aerially sown some crops, but his clients were mostly waiting for conditions to dry out enough so they could do their own wheat planting.

“With the price of it being so good, they may plant wheat or particularly barley into July.

“The days are getting colder, but we’ve had no major frosts to bring the soil temperature down, and if they can get cereals in the ground in the next 2-3 weeks, they could do alright.”

Mr Wilson said high fertiliser prices had prompted a small swing into lupins as an economical option, and a bigger one into canola, with its high cash price offsetting its hefty nitrogen requirement.

“Some canola went in early which was good, and most got all of their canola in and that’s where they had to stop.”

Mr Wilson estimates most growers have planted a maximum 50pc of their intended winter-crop area.

“It’s probably the wettest sowing window that I can recall, and most farmers I talk to haven’t seen one like it.

“It’s just so wet, and there’s water laying it places where you don’t normally see it.

“We’ve come from a wet harvest and it hasn’t really dried out.”