CROP seed for planting is a highly valuable asset and growers are encouraged to scrutinise and test it for disease carry-over, germination, vigour, degradation and any weed seed contamination. 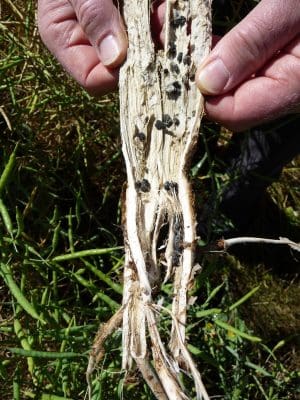 Testing canola seed for sclerotes and fungal pathogens before sowing is recommended this year to reduce risks of sclerotinia stem rot, pictured, and other fungal diseases. Photo: GRDC

He said there was high disease pressure leading into the 2017 cropping season stemming from record wet 2016 growing and harvesting conditions in some parts of the Western Australian grain belt.

“This has particularly increased the risks of canola seed carrying-over fungal disease pathogens and sclerotes from sclerotinia stem rot (caused by the fungus Sclerotinia sclerotiorum),” he said.

“Last year’s conditions were similar to those experienced in 2013, when badly affected WA canola crops with sclerotinia stem rot had yield losses of 0.5 to 1 tonnes per hectare.”

Sclerotes, which are the survival form of sclerotinia, have been found in canola grain deliveries across Australia this harvest.

These are typically about 5-10 millimetres in diameter and 20-30mm in length. However, they can vary widely in shape size and colour and can be difficult to distinguish from annual ryegrass ergot (Claviceps purpurea) – although, their size and shape should make them distinguishable from canola seed.

Dr Obanor said if sown with 2017 crops, sclerotes had the potential to persist in soil for up to 10 years and each one could produce up to 15 mushroom-like apothecia that released millions of spores.

“The spores infect canola petals and senescing leaves if conditions are right during the growing season and this continues the sclerotinia disease cycle,” he said.

“The grain trade tolerates canola grain sclerote contamination levels of 0.5 per cent by weight of the half litre sample (as impurities), which means even certified seed bought for 2017 may contain sclerotes.”

GRDC recommends testing canola – and other crop – seed through an International Seed Testing Association (ISTA)-accredited laboratory before sowing to identify potential presence of sclerotes and fungal pathogens and help with risk management planning.

This is essential if planning to sow canola crops in areas free from – or having low levels of – sclerotinia or other fungal diseases.

GRDC general manager crop protection Dr Ken Young said any grain subjected to wetting at harvest was also at risk of poor germination, low vigour or degradation during storage, which would impact on its germination and performance in 2017.

“Symptoms of seed quality deterioration can range from mild, such as a loose and wrinkled seed coat in some pulses, to more advanced, such as seed staining, fungal mould and visible signs of germination,” he said.

“Testing planting seed will indicate whether any weather damage is cosmetic or the symptom of these quality issues or a seed-borne disease.”

He said an AHRI survey of 78 WA farms in 2007-08 found 74 per cent of crop seed samples that had been cleaned were contaminated with weed seeds – to varying levels.

“The average contamination level was 8.7 weed seeds per one kilogram of crop seed and the main weed species was annual ryegrass (Lolium rigidum) at an average of 4.6 seeds/kg in more than half of all samples,” he said.

“This was followed by wild radish (Raphanus raphanistrum) at 2 seeds/kg.”

Dr Young said the project highlighted the importance of effective seed cleaning and grading and researchers had found the use of a gravity table, rotary screen and sieves reduced weed seed contamination significantly compared to using air systems.

He said post-harvest was also an ideal time to test weed seed samples for herbicide resistance to assess which actives were still effective on a property. This would facilitate effective and economic weed control for the coming season.

To assist growers in determining whether grain is viable for sowing and implementing an appropriate and effective seed management program, the GRDC has produced a detailed ‘Retaining Seed’ Fact Sheet that can be found at: www.grdc.com.au/GRDC-FS-Retainingseed.

It outlines key tips for retaining grain for planting seed, including: