WIDESPREAD rain across the northern farming zone in the past week has come at an ideal time for mungbean planting, raising the prospect of a big area of the crop going in over summer. While the small area of early mungbeans that went in in October suffered under unseasonal heat and dry, the recent rain has set up ideal conditions for the main planting window from December to early February.

Australian Mungbean Association president and Deacon Seeds general manager, Mark Schmidt, said there should be enough seed to cover demand, and growers should be encouraged by promising market prospects.

“We have more seed than we have ever held before,” he said.

“And the markets are still holding up. We have no stock available in Australia. China is starting to inquire. At the present time we are getting buyers chasing offers. There is talk India may come back into the market after June, depending on their political situation. We are expecting good demand.”

Pulse Australia industry development agronomist for the northern region, Paul McIntosh, said there had been a recent lift in inquiries from growers looking to plant mungbeans from a wide area of eastern Australia. 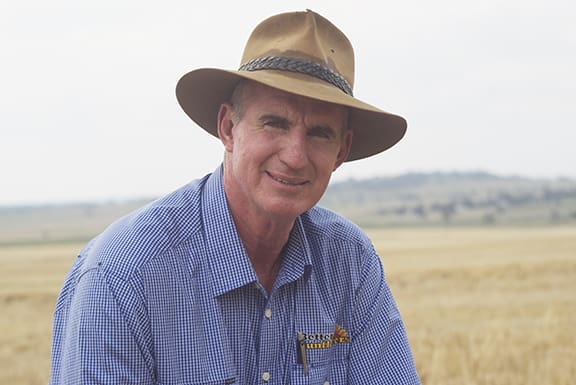 “Of the many agronomic inquiries I am getting asked about is the question of inoculation procedure for our favourite summer legume crop,” he said.

“When you consider that mungbeans need at least 70 kilograms per hectare of nitrate nitrogen in the root zone area to grow and produce a single tonne of grain, you really need to ensure your inoculation procedure is successful.”

Mr McIntosh said there had been a lot of speculation on pre-applying nitrogen to mungbean country to take the pressure off the inoculation process.

He said the best results were achieved when the nitrogen was applied well before a rain event so the water took it down through the topsoil profile into the deeper soil depths where the mungbean roots would proliferate later on.

To put some numbers on it, he said a rainfall event of over 75 millimetres – which occurred across much of the Darling Downs in the past week – onto a dryish topsoil would be a start to get nitrogen into the mungbean root zones.

“Notice I said a start only. Sounds a lot in rain event amounts and shallow soil depths achieved, however our soil structures and qualities can all be very different around our farms,” he said.

“The main consideration is that you should not assume that applying nitrogen in the top 80 to 100 millimetres of your soil profile just before a minimal planting rain is going to supply your future mungbean crop nitrogen needs if you decide not to inoculate your mungbean seed or you try to cover a possible inoculation failure.

“Mungbean plants develop so quickly from the heat units over summer there are very few correction options for a nitrogen catch up after planting or emergence.”

Mr McIntosh said successful inoculation was critical to germination and crop growth, and that meant avoiding heat and sun on the inoculated mungbean seed.

“These are the major killers of our microscopic bacteria that we need to avoid with temps over 30 degrees C proving fatal to inoculant,” he said.

“It may seem over the top to spend so much time and effort in this very labour-intensive process in getting peat or freeze-dried inoculant product onto seed, however it is so very necessary when planting mungbeans.

“Water injection at planting time is being used more and more and has proved successful, and less time consuming, than other manual processes.

“It is all a numbers game in inoculation. Whatever mechanical process you use, failure is not an option. So, spend some time accessing your inoculation process to achieve success in your mungbean crop.”