THE Indian Government’s announcement overnight that it has raised the tariff on chickpeas paid by importers to 40 per cent has further stymied Australia’s trade with its biggest pulse customer. 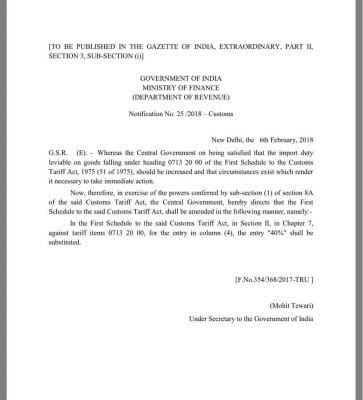 Chickpea trade to India had already stalled on India’s announcement in December of a tariff, imposed following India’s successful 2017 harvest, and bright prospects for the imminent 2018 rabi, or winter crop, harvest.

“Domestic prices in India have continued to tumble over the past six months, the 30pc import tariff on chickpeas in December failed to support local prices and, in a surprise move overnight, the Indian Government has increased the duty from 30pc to 40pc,” GrainTrend director, Sanjiv Dubey, said.

The increased tariff will further reduce demand for imported chickpeas, a situation which is unlikely to resolve until the market perceives that Indian producers have confidence in returns from their own crop.

December 2017 chickpea exports at 70,563 tonnes were down 69pc on the November total of 225,856t, according to data released this week by the Australian Bureau of Statistics.

Trade sources have said the drop was due to low yields in southern Queensland and northwest NSW, coupled with reduced demand from India.

“This year has been a bit of a dismal year in Australia, with estimates as little as 800,000 tonnes produced, and CQ has been the saviour,” Mr Dubey said.

Crops in CQ harvested in near-ideal conditions, and bulk tonnages were available to load early cargoes for India, Australia’s most important destination for chickpeas.

“CQ supplied around 250,000t of bulk shipments between October and December.”

Trade sources said they believed some growers were still holding stocks, but the present outlook for future price rises was not strong.

This is because India has the two-fold buffer of an ample domestic supply prospect, thanks to another better-than-average monsoon season, and is carrying stock of imported and local chickpea.

Other pulse-consuming nations in South Asia have displayed their own market characteristics.

Like India, Pakistan relies heavily on its own pulse production, with demand and supply dependant on satisfactory monsoon rain.

Bangladesh, a nation situated in the great river delta of the Ganges, has less land suitable for growing chickpea.

Mr Dubey said those factors meant that Bangledesh demand, though modest, was likely to continue.

“Bangladesh is a stable market in terms of volume, importing 100,000-150,000t of chickpeas a year because the country floods, and pulses don’t like wet feet.”

Market signals are doing little to encourage Australian growers to establish large areas of chickpeas when the planting window opens in May.

Today’s modest price outlook is set against the background of high prices caused by dry conditions two and three years ago which had caused hardship, drought and a severe shortage of pulses and grain in India.

India’s government, then as now, was balancing food prices with farmer welfare, leading to trade volume swinging substantially from one period to the next.

Containerised exports out of Sydney and Brisbane have also helped to shift the 2017/18 export surplus, as has support from secondary markets, namely Iran, Nepal, UAE and the UK.  See table 1.

Australian chickpea crops have averaged around 1.4-1.5 tonnes per hectare, but the 1.1 million ha planted in 2017 was thought to achieved closer to 0.8t/ha, with many crops in southern Queensland and northern NSW yielding as little as 0.2-0.3t/ha.

Table 1: Data released by Australian Bureau of Statistics in February 2018 showing chickpea exports in the six months to December 2017.