GERALDTON in Western Australia’s Mid West could prove to be a good location to grow the ancient grain quinoa. 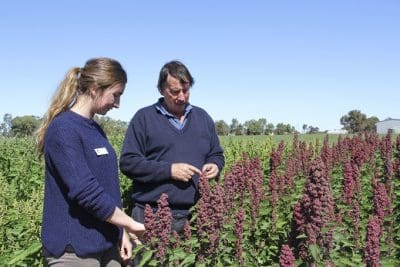 The WA Department of Primary Industries and Regional Development has been trialling quinoa, at four sites across the state.

Department research officer Richard Snowball said although this was the first year of the Geraldton trial, the plot was looking very promising.

Mr Snowball said shifting the trial to a fertile soil, close to the coast where winter temperatures were warmer, might have made the difference.

“We moved the trial site to Woorree, east of Geraldton, after poor trial results at Mingenew and Cunderdin last year, which possibly as a resulted from below average temperatures across the grainbelt,” Mr Snowball said.

Three advanced lines of quinoa developed by the department and AgriFutures Australia have been sown, as well as Medusa, the Three Farmers variety grown in WA, and landrace varieties that originated in Chile and Bolivia.

Mr Snowball said crop establishment had proven to be a challenge with a number of failed trials this year.

“While the Woorree trial is doing exceptionally well, the trials at Katanning, Esperance and Eradu are looking patchy and the Manjimup one was only sown last week so it is too early to tell how it will fare,” he said.

“The successful plant establishment achieved at the Wooree site is likely to be a result of selecting a fertile loam soil, adequate soil moisture at planting and precise placement of seed at a shallow depth.

“We now plan to undertake a glasshouse experiment to examine the potential factors affecting establishment.”

The best yielding quinoa trial in the 2016 National Variety Trials was 2.7 tonnes per hectare, from an irrigated crop at Bool Lagoon in South Australia.

“Above average winter temperatures affected the 2016 Kununurra irrigated trial, which produced a top yield of 1.2 tonnes per hectare, compared with the previous year where yields reached 2t/ha,” he said.

“The Cunderdin site established well in 2016, however, frosts in August and September severely affected flowering and subsequent seed production.”

The project is funded by AgriFutures Australia, the new trading name for the Rural Industries Research and Development Corporation.