Russian wheat aphid on the march

THE RUSSIAN wheat aphid pest, which was first detected in South Australia in mid-May, continues its march through Australia’s cropping regions with infestations now stretching throughout south-eastern Australia and likely to extend into the northern farming regions.

The exotic pest was first detected in a wheat crop at Tarlee in South Australia’s Mid North on May 13, but has since spread into Victoria and was recently found in the Murray Valley and Riverina of southern NSW. 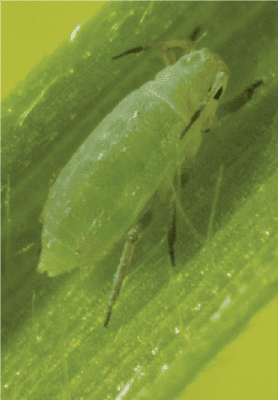 Queensland Department of Agriculture and Fisheries principal entomologist, Melina Miles, said it was inevitable Russian wheat aphid (RWA) would continue to spread and establish in the northern grains region, although it is hard to say when. It may be this spring, or it may not be for several seasons.

RWA movement is more likely to occur in late spring and early summer, as winter hosts start to die off, and movement is facilitated by wind.

In a paper presented to the GRDC Updates, Dr Miles said RWA was considered a high priority pest because of its potential to cause significant yield losses in wheat and barley if not well managed. Triticale and rye were also susceptible to crop loss, but oats were considered relatively tolerant.

Although RWA is more damaging to cereals than the aphid species already in Australia, the susceptibility of Australian varieties is unknown.

Dr Miles said that while potential yield losses of more than 60 per cent were reported overseas where RWA were not controlled, international experience with RWA had been that, in seasons following initial outbreaks, yield losses were generally lower as growers became better equipped to detect and manage infestations, and natural enemies established and contributed to the suppression of populations.

There are a number of natural enemies which attack RWA including parasitic wasps, ladybird beetles, lacewings, damsel bugs, hoverflies and entomopathogenic fungi. Entomologists have already observed mummified and fungus-diseased RWA.

RWA populations are also strongly regulated by weather conditions. Rainfall and drying winds can kill RWA outside the shelter of leaf rolls, with heavy rain events able to cause 50pc mortality in the aphid.

While RWA has not yet been detected in Western Australia, the ease with which the pest spreads has put growers on alert for a potential infestation to reach the State.

“Unlike other aphids, Russian wheat aphids inject a toxin into susceptible crops, like wheat and barley, which can severely retard growth or under heavy infestations, kill the plant. However, we do not know how it will affect cereal crops in Australian conditions,” he said.

There are no expected trade impacts for the export of grain or other commodities as harvested grain and dried plant products are not a suitable host for the pest.

The National Management Group (NMG), comprising all Australian governments, Grain Producers Australia and Plant Health Australia, has determined that it is not feasible to eradicate RWA.

That decision has triggered the involvement of the Grains Research and Development Corporation (GRDC) which has called on growers to adopt a threshold-based management strategy that considers impacts on beneficial insects.

Dr Miles proposes that for the northern region a threshold of 5pc infested tillers be used for crops with a yield potential over 2 tonne/hectare. Crops expected to yield 2 t/ha or less, should use the 10pc threshold.

What is Russian wheat aphid?

Russian wheat aphid (Diuraphis noxia) is found in all major cereal production regions around the world, but never in Australia before now.

It is a major pest of cereal crops that injects toxins into the plant during feeding which retards growth and, with heavy infestations, kills the plant.

The aphid is spread easily by the wind and on live plant material.

RWA is approximately 2mm long, pale yellowish green with a fine waxy coating. The body is elongated compared with other cereal aphid species.

More information is available from: