A CREATIVE ‘grains parody’ and ‘high flying barley’ clip promoting the Australian grains industry have been awarded $1000 each in the 2016 Seed to Store YouTube Clip Competition.

Held at the Royal Adelaide Show’s Grains Day on Tuesday, Grains Ambassador Andrew ‘Cosi’ Costello announced winners of the competitive entry where school students and community members are invited to submit a one-minute video promoting the story of grains – from paddock to plate. 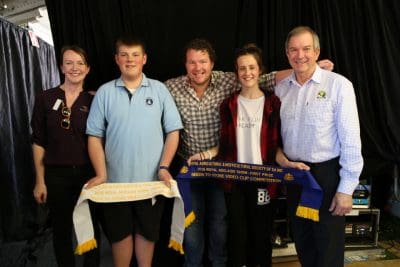 Mr Buckby said the competition attracted an impressive range of video entries from across Australia which showcased how farmers, scientists, agronomists and agribusinesses work together to produce high quality grain for Australian consumers.

“The competition is a great way to connect industry, schools and the wider community while promoting the grains industry,” he said. “We had a great time judging the competition and thank all entrants for their submissions in the school and community categories.”

First place in the school student category was ‘We grew it here’ by Aimee Gladigau, who lives in South Australia’s northern Mallee region on a farm which crops 11,000 hectares of wheat, barley and pulses.

“I have been making videos with my dad John to promote our collaborative farm, Bulla Burra, for three years. I was jamming on my guitar one afternoon to Rip Tide by Vance Joy and thought it would be perfect as a parody about wheat for the competition,” she said.

Second place in the school category was awarded to Keith Area School’s Jaxon Raynor and Thalia Cox for their clip ‘Seed to Store: Canola’.

‘Grain to Garment’ by Zac Cross and Joel Bretag from Lucindale Area School was third. 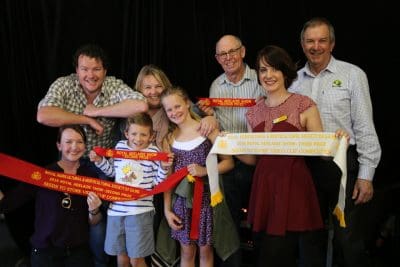 In the community category, first place was awarded to ‘High Flying Beer’ by Sascha Estens from Moree, NSW.

“This clip showcased how a family operation works together to produce high quality barley which is sold for beer production. It came complete with impressive footage and humour,” Mr Buckby said.

Neighbourhood team Peter and Jen Frith and Eve and Henry Green were awarded second in the community category for their clip ‘Studio Grain’, and University of South Queensland animator Zoe Lynch was awarded third for ‘How to make toast’.

After winning the blue ribbon in 2015, Henry Green, 7, from Mitcham Primary School and Eve Green, 12, from Concordia, decided to enter the competition for the second time because they enjoyed spending time at their grandparents’ dairy property near Mount Compass.

“Henry and Eve’s video was impressive as they focused on pulse crops. Their theme tied in perfectly with the 2016 International Year of Pulses and was creative, fun and professional,” Mr Buckby said.

Along with the YouTube Clip component, the Seed to Store initiative has also supported Mr Costello to work with the education team at AgCommunicators – convenors of the competition – to visit schools throughout rural, regional and metropolitan SA.

AgCommunicators education officer Sarah McDonnell said the team had engaged more than 500 students in the South East and Adelaide Hills to promote the opportunities, careers and innovation in the grains industry.

“We are working to not only attract more people into careers in the grains industry, but we are showcasing the role of Australian farmers and scientists in producing high quality grain for consumers,” she said.

The Seed to Store YouTube Clip Competition is an initiative of the South Australian Grain Industry Trust and the Grains Research and Development Corporation, with support from the Royal Agricultural & Horticultural Society.