Seeds on ice in the Arctic protect global food security

THE Svalbard Global Seed Vault in Norway is the best insurance policy the world has for securing future food supplies, according to the former Deputy Prime Minister of Australia, Tim Fischer. 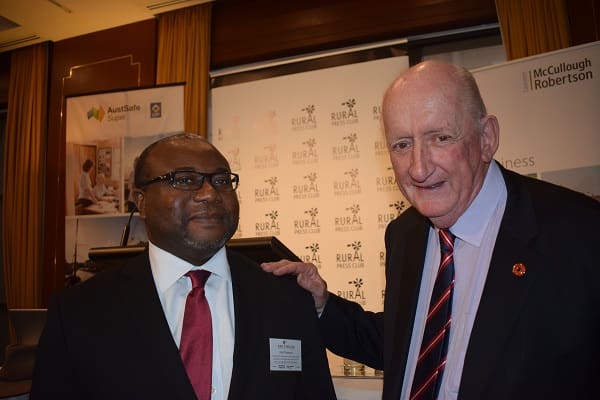 The ‘doomsday vault’, as it is sometimes called, is buried deep inside a permanent ice mountain on a remote island halfway between mainland Norway and the North Pole. It is the world’s largest secure seed storage for a wide range of species, including crop and pasture seeds from Australia.

Speaking at a Rural Press Club of Queensland lunch in Brisbane yesterday, Mr Fischer, said the international seed bank at Svalbard held the keys to the future of agriculture in the world.

“There are more than one million individual varieties of accessions stored in silver envelopes with barcodes. It is not something that is a cobweb museum way up there in Svalbard four hours’ flying north of Oslo,” he said.

“This is about the future of food security in the world. We are building it into a new initiative called ‘Food Forever’ because the world needs to produce in the next four decades as much food as it has produced in the previous 2000 years if we are to have adequate food supplies for the world.

“The Himalayan glaciers are rapidly vanishing. So, the flood-outs of the Irrawaddy, Mekong and huge rivers of India that produce so much rice will be affected. We could be looking at 50 million people getting on boats looking for food if the problems are not overcome with better breeding through the ‘Food Forever’ initiative supported by the Crop Trust.

The Svalbard vault features three, cathedral-sized chambers inside the ice mountain that preserve the seeds at a constant minus 15 degrees Celsius. Mr Fischer said when the vault was established a decade ago, the temperature in the ice mountain was two degrees colder at minus 17 degrees.

“The temperature has moved that much in the first 10 years of operation of the vault,” he said.

Mr Fischer said a key element of the project was that the ownership of the seeds in the vault remained the property of the gene banks that supplied them, which included Australian providers such as the Australian Grains Genebank at Horsham in Victoria and the Waite Research Institute in South Australia.

He said it was also important that, by international law, access to the seed bank and research findings was available to all communities around the world through the CG movement’s centres for international agricultural research. “With IRRI (International Rice Research Institute), for example, under the laws of the world and the international plant treaty, every breakthrough with rice has to be shared with the Riverina rice growers,” he said.

“They can take them through a process of identification and suddenly find traits in such things as the 4000 Peruvian varieties of potatoes stored in Svalbard which will help the Bhutanese and Tasmanian potato growers,” he said.

“Under our plant treaty provisions, all this information has to be shared.”

Mr Fischer said the Svalbard vault had played a vital role in preserving the priceless crop seed collection from the International Center for Agricultural Research In the Dry Areas (ICARDA) in war-torn Syria. “When ICARDA, with some of the best wheat seed collections in the world, got blown up by ISIS two years ago, luckily four years ago they had sent seed to Svalbard. They had backed up the best of the wheat,” he said.

“ICARDA has now moved to Lebanon and Morocco. They have the first accessions of seed to have been withdrawn from the vault in its 10 years of operation. That happened in September 2015.”