Sticking it to Noogoora burr A NATURALLY occurring fungus is being harnessed to tackle Noogoora burr, an invasive weed which causes major impacts on agriculture and the environment in eastern Australia.

“Glasshouse trials have found the fungus will infect Noogoora burr, but it requires an extended period of dew or surface moisture for maximum impact,” Mr Charles said.

“In collaboration with Melbourne University, we are developing complex emulsion formulations of fungal spores, which retain moisture to enhance infection of the weeds over time.

“Noogoora burr poses a unique conundrum due to its many species and complex DNA – we need to ensure the fungus is effective across all species. 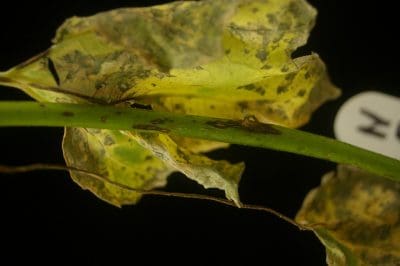 To date approximately 100 samples have been collected from New South Wales and Queensland.

In preliminary DNA barcoding and population genetics work NSW DPI and the University of Queensland found Hunter burr and Noogoora burr are genetically different but hybrids of both exist.

This information will be useful in understanding any future species-specific responses to the new bio-herbicide.

NSW DPI cotton pathologists are using molecular techniques to determine what strain of V. dahliae is hosted by each of the species in the Noogoora burr complex.

In Australia there are three strains of V. dahliae in cotton and it is important to identify alternative hosts of each strain. Preliminary DNA results indicated individual burrs can host more than one strain of this pathogen.

NSW DPI is leading a two-year project funded by the Australian Government Department of Agriculture and Water Resources, in partnership with the Cotton Research Development Corporation, Murrumbidgee Irrigation and the University of Queensland to develop a bio-herbicide to manage the weed.

The Noogoora burr project commenced in 2017 and will run until 2019 under the Australian Government’s Control tools and technology for established pests, animals and weeds competitive grants program.