“Our team are excited to release this variety as a lower risk alternative to Suntop, with excellent grain size, reduced levels of screenings, improved yields, a longer coleoptile and increased disease resistance,” Mr Lush said.

“Over the last three years of testing, Sunchaser has produced grain with lower screenings levels than Suntop and Reliant while proving very similar to Spitfire.

“In fact, the screenings levels of Sunchaser have consistently been two per cent lower than Suntop, from low to high screenings risk situations.

“Elevated screenings can contribute to downgrades at point of sale, so this feature in Sunchaser has the potential to improve grower’s profitability compared to varieties such as Suntop, amongst others.

AGT wheat breeder Meiqin Lu, based at The University of Sydney’s Plant Breeding Institute at Narrabri in north west New South Wales, said one of her main breeding objectives was to improve Suntop’s grain size and disease resistance while retaining its very wide adaptation, yield and agronomic suitability.

“We believe that we have achieved this goal with Sunchaser,” she said.

“Another key attribute of Sunchaser is its coleoptile length. Three years of testing has shown that Sunchaser has a longer coleoptile than Suntop, Spitfire and Reliant. “In a region where moisture seeking planting is a regular occurrence, the longer coleoptile of Sunchaser should be valued by growers.

“We are also pleased to report that Sunchaser offers an improved disease resistance package in comparison to Suntop, with greater resistance to stem rust, leaf rust, yellow leaf spot and crown rot.

“Sunchaser is suited to the main season planting window and matures slightly quicker than Suntop and Reliant, and a little slower than Spitfire.”

Sunchaser has an APH quality classification for NSW and Queensland.

“It has been in the NVT (National Variety Trials) for a while and was higher yielding than the other current northern region durum varieties. It is a higher yield than Lillario which has been around for a while,” he said.

“It has good semolina colour and an ADR quality classification, so it should be well accepted by industry.

“It is a slightly taller variety than some of the other durum varieties, but it does have good straw strength and stands up well

“It has a similar maturity to Caparoi, so it fits into the slightly longer season of the durums. But there is not a lot of difference. There is probably only about 10 days difference in maturity from the slowest durum to the quickest durum. Westcourt is at the earlier sowing end.”

Commercial seed for both varieties will be available for the 2020 season through AGT affiliates or local retailers.

THE eastern Australia drought has had a huge impact on the National Variety Trials (NVT) in the northern farming system this season.

NVT northern manager, Laurie Fitzgerald, said many of the crop trials had failed and would not make it through to harvest.

“Unfortunately, it is replicating what a lot of grain growers are going through at the same time,” he said. 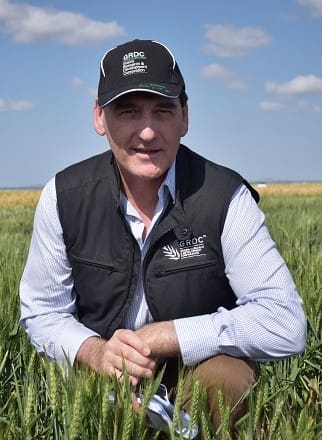 Mr Fitzgerald said the NVT at the Tosari Crop Research Centre near Brookstead on Queensland’s Darling Downs was one of the few where the trial crops were still ‘green’ and would provide results this season.

“The early wheat, main wheat and barley trial at Tosari will give us good trial results that we can share with growers at the end of the season after harvest. A pre-irrigation was a help to ensure we get some trial results, but it is not an irrigated trial site. It’s just had some supplementary water,” he said.

“In the early wheat trial planted in the middle of May there are 23 different wheat varieties. Seven of those are experimental which the seed companies expect to release within the next two years.

Mr Fitzgerald said the other area where crops had done well was in Central Queensland which had had a good season.

“There is early wheat, main wheat and barley there in trials. Fortunately, all the harvesting should be completed by the end of this week, so it is a very good success rate for Central Queensland this year,” he said.