IT HAS been another high-yielding year for canola at Sisters Creek in north west Tasmania where Redbank Farming’s cropping manager, Michael Nichols, has just finished harvesting 13 hectares of Clearfield 970 that went 5.5 tonnes/hectare. 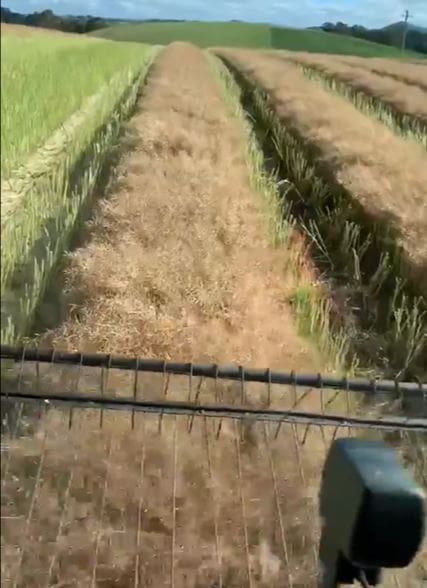 It’s not quite up to the Australian record-breaking canola crop Mr Nichols produced in January 2017 when he stripped 52.52 tonnes off 8.5 hectares for an average yield of 6.17t/ha (see Grain Central story).

It could have come close this time if not for an outbreak of sclerotinia stem rot which took the edge off the crop’s yield potential.

“There was about 20 per cent of it had sclerotinia in the stems that I couldn’t control. I will have to focus on managing that a bit better,” he said.

This season’s crop was planted on Anzac Day, April 25, last year at about 40 plants/square metre.

It had 250 units of nitrogen applied over the growing season.

Because the crop grows to over head height, two growth regulators were applied to keep down the bulk and assist with harvesting.

“We had good rainfall this year. We ended up with about 800 millimetres for the growing season,” Mr Nichols said. “It was about six foot tall. The stems were like tree trunks. We have to go through and windrow it with a 14-foot front. Then I pick up just one row at a time with the pickup front.”

Canola is just one of a range of crops grown in rotation on Redbank Farming, including mustard seed, peas, poppies, potatoes, pyrethrum, onions and wheat.

The pyrethrum has been harvested, producing around 50 kilograms of assay per hectare. So too have the canning peas.

Mr Nichols expects the onions to produce around 65t/ha when harvest comes around shortly. The potatoes should do about the same.

The wheat is yet to come off, but should yield around 11t/ha. There is also some buckwheat in for the Japanese market.

“I have started a grain pool in the local area. There are 2500 tonnes of grain to be harvested and sold direct to local dairy farmers. It is all in house,” Mr Nichols said.

“We are trying to encourage more grain to be grown. When you can get an average of 10t/ha for the area and with wheat prices at $400/t it is not too bad.”