A 150-per-cent tax incentive on multi-peril crop insurance (MPCI) premiums would save the Federal Government $7 for every dollar spent, according to a Williams Hall Chadwick report. 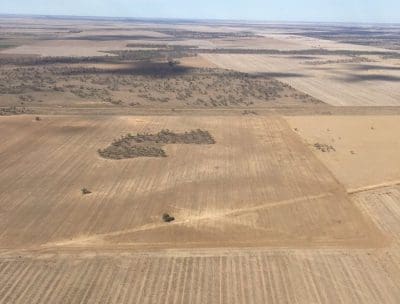 The report focused on the economic impact of drought, which it said could wipe up to one percent from the nation’s GDP based on a winter-crop value of $12-$15 billion.

“Perhaps it is time to investigate underwriting commercial solutions for risk management in the form of multi-peril crop insurance,” he said.

“What we have now is an ad-hoc compensation for a lack of risk mitigation”.

Mr Perkins said a tax incentive for farmers to insure themselves against the vagaries of the notoriously unpredictable Australian weather would deliver economic benefits at the farm level as well as benefits flowing to regional communities.

A 150pc tax incentive would be in the style of the Australian Taxation Office’s research-and-development incentives.

Mr Perkins said MPCI programs were common in North America, Canada and in parts of Europe, and a properly funded equivalent in Australia would mitigate a large proportion of the financial risk and convert this risk mitigation to an annual cost of operation.

He said a 150pc tax incentive could deliver financial mitigation of drought risk as well as improve financial outcomes to farmers, with a 7:1 return to the Commonwealth Government in terms of increased tax receipts compared to foregone tax revenue on the additional tax incentive.

“Therefore it is a strategic investment by government, rather than an outlay.”

However, it does not offer a subsidy on the premium; the Managing Farm Risk Programme announced in 2016 has offered a 50pc rebate on the cost of advice and assessments required to enable a grower to take out a policy.

Through an Independent Pricing and Regulatory Tribunal (IPART) report, the NSW Government has also looked at MPCI as a means of farmer’s financial self-reliance during drought.

While it has not opted to subsidise premiums, or the cost of assessments needed to take out policies, it has agreed to waive the 2.5pc stamp duty on MPCI products from 1 January, 2018.

Grain Producers South Australia (GPSA) has in recent months been calling for the state’s Labor and Liberal parties to waive the stamp duty on multi-peril crop insurance.

GPSA said both parties had now agreed to this waiver.

Australian Farm Institute executive director, Mick Keogh, has been an advocate for MPCI as a means of countering the unavoidable spectre of drought in Australia, and the knock-on effects it has to rural communities and the wider economy.

In a recent opinion piece, Mr Keogh said a 150pc tax incentive had potential to bolster farmer incomes, on which tax would be payable.

“At the same time, this income would flow through to regional communities, which typically suffer economic downturns as a consequence of serious drought, and hence impose additional social welfare costs on the government.”

To date, Latevo has been the major supplier of MPCI in Australia.

When Latevo first made the product available in 2014, 30 farmers across Australia took out policies. The number increased in 2015, and last year, Latevo wrote 56 policies at a premium cost of $13-$20 per hectare.

Latevo was not able to move from its three-year pilot program, which concluded last year, to full commercialisation in time to offer policies for the 2017 winter crop.

The company has confirmed it will be back in the market in 2018 with a panel of international insurers.