What can be done to regain control of herbicide resistant sowthistle? 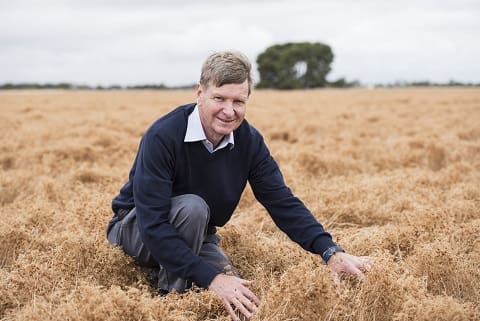 The University of Adelaide’s Dr Chris Preston says in some paddocks, tight lentil wheat rotations has caused a complete failure in sowthistle control every second year, adding massive amounts of seed to the seed bank.

HAVING once been a fairly innocuous weed on farms around Australia, sowthistle is now a major weed in many farming systems and has become very difficult to control.

“We have seen two different scenarios unfold in the southern and northern grain growing regions of Australia,” he said.

“In southern regions, sowthistle is a major problem in lentil crops where it is able to take advantage of unused soil moisture in spring to establish in gaps in the crop. Having long been resistant to the ‘SU’ herbicides in Group B, the frequent use of imi-tolerant lentil varieties has led to the rapid evolution of resistance to the ‘imi’ herbicides in Group B, leaving no in-crop options for control.”

This means the only form of herbicide control available late in the season is the use of desiccants. Desiccants for use in pulses, such as Sharpen, often do not kill the sowthistle plants and so it is able to recover and go on to set more seed.

“In the northern cropping region the problem lies in summer fallow management,” he said.

“Farmers are observing rate creep with both glyphosate and 2,4-D, where higher rates are now required to achieve the same level of control. While glyphosate resistance has been confirmed in the north, there are no confirmed cases of 2,4-D resistance in the north, but I have no doubt that this will be confirmed in the field sooner rather than later due to the amount of phenoxy herbicides being applied in fallows.”

With limited herbicide options available, finding ways to disrupt the expansion of sowthistle populations will need to be front and centre when planning a weed management program.

Longer answer: Lentils and several other pulses have been very profitable and this has supported tight lentil wheat rotations in some areas. In some paddocks this has caused a complete failure in sowthistle control every second year, adding massive amounts of seed to the seed bank. Spreading out the less-competitive crops such as lentils and choosing highly competitive crops to add to the rotation will help drive down weed numbers. Sowthistle is well-known as a non-competitive weed when small.

What other summer fallow methods can be used?

Longer answer: In the northern region, the use of glyphosate + 2,4-D followed by paraquat as the double knock is unlikely to be effective long-term. When mixed together, glyphosate and 2,4-D are antagonistic on sowthistle, reducing the efficacy of both tank mix partners. Sowthistle also has the potential to evolve resistance to both glyphosate and 2,4-D, which would make the first knock ineffective. With few other herbicide options other than perhaps the use of residual chemistry, growers will need to implement other control measures. To drive down numbers, control in spring is critical. Changing the combination of summer and winter cropping could enable better control in spring.

Short answer: Yes, even resistant sowthistle plants are more susceptible when they are very small.

Longer answer: The label on glyphosate products typically specifies two different rates according to plant size classes and following these instructions is very important. If a lower rate is applied to larger weeds they can take a long time to die (if at all) and may well set seed before the plant dies, making the application a waste of money.

One of the difficulties with managing sowthistle is the fact that it can germinate at any time of the year if soil moisture is available. In favourable conditions, this weed can set seed within months and has the capacity to produce about 6000 seeds per plant.

Is mechanical weed control an option for sowthistle?

Longer answer: HWSC is not very effective in capturing sowthistle seeds, which easily disperse on the wind. The removal and destruction of immature seed heads following desiccation will still have a positive effect on weed seed numbers.

Infrequent cultivation that buries seed to a depth of 2 centimetres or more can help to reduce emergence however repeated use of cultivation can bring seed back to the soil surface where germination can occur. Sowthistle emergence occurs primarily from seeds close to the soil surface with up to 30 per cent of viable seeds emerging over five months. Seed can emerge from a depth of up to 2cm with approximately 4pc emergence after six months. Seed buried below 5cm is unable to emerge and can persist at depth.