Exemptions put NSW grain on rail back on track 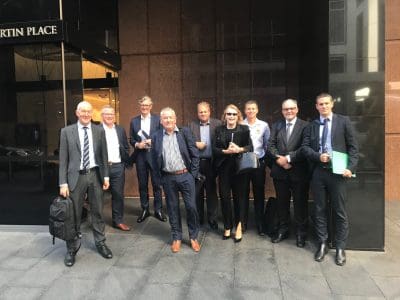 THE NSW Government looks set to grant exemptions to rail operators which will allow them to keep older locomotives in service when new NSW Environmental Protection Authority (EPA) regulations come into effect.

The move has been applauded by the Save Our NSW Grain Lines alliance, and comes out of its meeting in Sydney yesterday with NSW Environment Minister Matt Kean, with support from Deputy Premier John Barilaro and Minister for Agriculture Adam Marshall.

“In what are highly technical issues, I believe we found a balance between satisfying the community’s concerns whilst limiting the impact on industry,” Mr Kean said.

“I made it clear to those present that we do not want to see rollingstock taken off tracks and replaced by trucks.

“However, we do have a duty to ensure communities are not impacted by extreme noise and air pollution just because they happen to live near rail lines.”

Alliance member and SSR director Jason Ferguson thanked Messrs Barilaro, Kean and Marshall for listening to the concerns of industry, and acting upon its advice.

“If safe and efficient freight-train services are brought to a halt because of unnecessary and counter-productive ‘green tape’, then regional communities take a big hit,” Mr Ferguson said.

Mr Ferguson said many rail lines in country NSW were laid before Federation, and were not capable of accommodating heavier modern diesel locomotives to haul grain and other commodities.

“This debate was never about industry resisting the purchase of new locomotives – it was about recognising older, lighter loco classes provide fit-for-purpose haulage services on many regional rail lines.”

The alliance expects exemptions will be formalised in the near future.

Yesterday’s meeting forged an agreement for an Industry Working Group involving the NSW EPA to tackle noise detection and abatement.

“Just like any vehicle, different types of locos have different noise profiles – the EPA’s original proposals didn’t factor this in.”

This will take into account the fact that train noise can come from “wheel squeal” as caused by infrastructure, notably on curved sections of track, on top of engine noise.

“This can happen…when timber sleepers are replaced with concrete sleepers on curved sections of track.”

This results in increased friction on wagon wheels which can cause noise.

“I commend the minister for establishing an industry working group to explore these complex engineering and technical issues in greater depth.”

Those present at the meeting hosted by Mr Kean on the draft Environment Protection Licence for Rollingstock operators included:

Source: Save Our NSW Grain Lines