PN in talks with Wagner on Wellcamp Logistics Hub 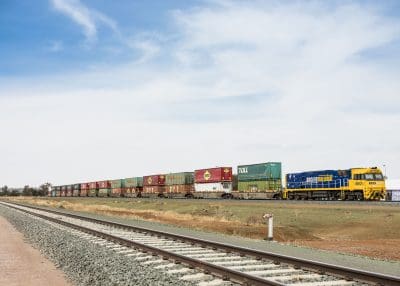 PN is already carrying double-stacked containers on some of its services. Photo: PN

PACIFIC National (PN) and Wagner Corporation are discussing the possibility of developing a major logistics hub at Wellcamp Business Park west of Toowoomba which would link road, rail and air services.

“The Darling Downs is one of the most productive agricultural regions in Australia, while Toowoomba is an incredibly progressive and vibrant regional city,” Mr Dalla Valle said.

Features of the proposed Wellcamp Logistics Hub include:

“When Wagner Corporation attended the October 2019 opening of Pacific National’s logistics terminal in Parkes – also located on the Inland Rail alignment – it gave us an exciting picture of what could be achieved with future rail freight services at Wellcamp,” Mr Wagner said.

Already under development a few kilometres north of Wellcamp is the InterLinkSQ intermodal freight terminal.

It is being marketed as a master-planned  transport, logistics, warehousing and industrial estate funded by local individuals and businesses, and SEAWAY Intermodal has been named as the terminal operator.

SEAWAY Intermodal already operates a containerised rail service between Sunraysia and the Port of Melbourne which carries grain and other commodities for export.

InterLinkSQ is expected to start operation in the middle of next year.

Located at Charlton, it has a 3km frontage to the West Moreton rail line which links Toowoomba and the Port of Brisbane with centres including Charleville, Cunnamulla, Dalby, Roma and Quilpie.

InterLinkSQ is seen as having potential to handle agricultural commodities including beef, cotton, grains and pulses.

In the eyes of landholders on or near the Inland Rail route, its proposed alignment across the Macintyre and Condamine floodplains appears to be the project’s stumbling block.

Regardless of which route it takes across the Condamine floodplain between Millmerran and Pittsworth, it is expected to run along the edge of Wagner Corporation’s Wellcamp precinct before joining the West Moreton alignment near InterLinkSQ.

Australian Rail Track Corporation (ARTC) is delivering the project on behalf of the Australian Government, and last week its chief executive Richard Wankmuller said the community could be confident in its robust flood-modelling to date.

“We have the utmost confidence in our flood modelling, which has been conducted, reviewed and verified separately by the country’s and Queensland’s leading hydrology experts,” Mr Wankmuller said.

“Our confidence comes from the fact that five different companies, all experts in their field, who’ve done this many times before, have confirmed that this flood modelling is comprehensive, meets industry standards and is fit for purpose.

“The science tells us there is no premise to change the route based on flood modelling and the economics tells us that this route was the most viable, cost effective option.

“We have long-acknowledged the concerns of the community, which is why we continue to incorporate their local knowledge into our model and how we design the rail line that will cross the Condamine floodplain.

“It’s important governments and the community have confidence in the engineering and science that allows countries like Australia to deliver world-class infrastructure.”

However, the proposed route continues to draw criticism from landholders who will be affected, and also from some members of the Federal Parliament.

The route is the subject of a Senate Inquiry, and its committee has until 30 September to write a report on Management of the Inland Rail project by the ARTC and the Commonwealth Government.