Graeme Cowans makes all of Harvestaire’s feeder-house and paddle chains at the company’s premises in Balcatta. Photo: Harvestaire

WESTERN Australian fabricator and importer Harvestaire is on the move as it expands its reach to better service grain and sheep operations across Australia.

The business is in the process of a staged move within the Perth suburb of Balcatta from the premises it has occupied since it opened its doors in the 1980s, and is also looking for a hub in eastern Australia.

Company general manager Dirk Vorster said the new Balcatta premises will better enable Harvestaire to meet expanded demand for its aftermarket harvester parts, and the lamb cradles made with offcuts from the shop floor.

“We will have the warehousing capacity to manufacture and stock larger quantities than before,” Mr Vorster said.

“This will significantly reduce manufacturing lead times in harvest and keep growers moving.”

Now made in the United States, it is but one of the lines Harvestaire either fabricates or imports which can reduce harvest losses, recently the subject of a WA study.

CWS blows air at high velocity over the cutter bar to increase the flow of crop over the knife, and is used in the harvest of lupins, WA’s biggest pulse crop by far, as well as cereals.

“CWS comes into its own with lupins.”

Other boons to efficiency in the Harvestaire range include US-made Kondex concaves which reduce rotor loss.

“We also manufacture our own and crop lifters, engineered for Aussie conditions.

“They are a big seller for us in canola.”

Mr Vorster said COVID-related disruptions to imports have prompted Harvestaire to stock an increased inventory of parts, and to fabricate more parts ahead of orders.

“What we hear from the USA and from Europe is it’s not going to fix itself in 12 months.

Harvestaire imports from numerous suppliers, and Mr Vorster said Harvestaire has had to be pragmatic about where it sits, both geographically and in the business landscape, in the post-COVID world.

“Our order will always come second to OEMs’.”

With extended wait times for new headers, Mr Vorster said growers and harvest contractors were thinking harder about getting increased efficiencies out of their existing machines.

He said most demand was coming for parts for 2388 headers which rolled off the Case IH production line in the late 1990s, and John Deere models of a similar vintage. The sign is moving with Harvestaire’s workshop to new premises. Photo: Harvestaire

Harvestaire’s customer base is growing in eastern Australia, and has recently expanded to include Tasmania.

“Half of our customers are in WA, and the balance is in the eastern states.

“We’re in the process of looking for a depot in southern New South Wales or northern Victoria.”

Staff numbers are also increasing, with numbers up from around 30 to 36 over recent years, and a few more are likely to be added once a south-eastern Australia site is found.

“We’re now dealing more in Queensland and NSW than we were, and we recently had a conversation with a grower about harvesting mungbeans, and how to adapt the Kondex KX7 concaves to suit this crop.

Mr Vorster said the company now has first, second and third-generation customers, and around 20 of them have already been to the new premises to pick up header parts ahead of harvest.

The business has made a name for itself in manufacturing hard-to-come-by parts, and modifying designs to ensure they will last in Australia’s tough conditions.

“The same goes for our imported range.”

Mr Vorster said each product offered is carefully selected or built for quality, and ability to deliver on-farm improvement.

Orders for Harvestaire parts can be made through one of the company’s in its dealer network, with its parts interpreters, or online.

“Our online portal is just one part of automation we’re able to offer for the customers that want it, and we currently have more than half of all our orders placed online.”

Cradles were first made at Harvestaire in 1987 to value-add offcuts from the header parts manufacturing process, and therefore use high-grade steel from mills across the globe. 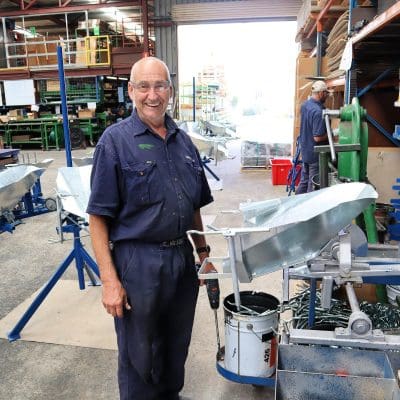 Bruce Edwards is part of the Harvestaire team that fabricates header parts, and makes lamb cradles with the offcuts. Photo: Harvestaire.

“Everything we do is over-engineered.”

Harvestaire cradles come in models of three to seven berths.

Production is creeping up, with around 450-500 cradles now made per year.

At this time of year, Harvestaire reduces its production of cradles to focus resources on fabrication of parts ahead of harvest.

“We used to make lamb cradles in the first months of the year, and then go into header work.

“We don’t do that now; we’re making everything year round.”

The company is owned by Western Australian business partners including Mr Vorster, who is one of Harvestaire’s six directors.

It expects to have completed its move to the new Balcatta premises by January.