THE NSW Government has committed a further $1 million to extend the Quad Bike Safety Rebate Program for another 12 months. 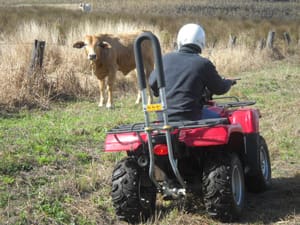 NSW Farmers’ president, Derek Schoen, said while quad bikes were invaluable work vehicles, they were one of the main causes of fatalities on farm.

“The Rebate Program incentivises farmers to consider the right vehicle for the right tasks and available safety measures such as operator protection device and helmets,” he said.

“We appreciate the Rebate Program is a part of a comprehensive Quad Bike Safety Improvement Program which includes training and greater awareness raising.“

The announcement also includes a commitment of $700,000 for funded training and a communications campaign.

Mr Schoen said the $1.7 million budget commitment aligned with the approach NSW Farmers had been advocating for, where safety improvements were driven by education, assistance and partnership with industry.

“The Quad Bike Safety Rebate Program introduced in 2016 has been highly successful, the initial funding of $1.522 million has been fully expended and farmers have invested more than $21 million in improving quad bike safety,” he said.

Mr Schoen said NSW Farmers was also a supporter of the introduction of a safety rating scheme for quad bikes and side by sides.

“Quad bikes and side by sides are products where you don’t know the vehicle performance until you purchase one and use it for several days on the farm. There are quad bikes with various specifications available in the market. Having easy to understand safety rating information at point of purchase will assist farmers to make better and safer decisions,” he said.