THE Australian Grains Industry Conference (AGIC) mobile roadshow events — yesterday in China and early this week in Vietnam— were sold out conferences, confirming these destinations are hungry for information on Australia. 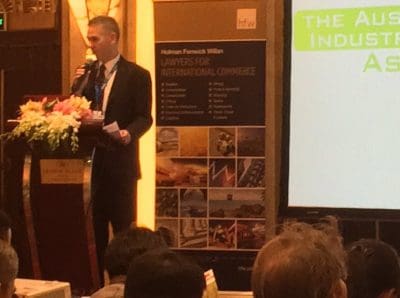 Grains, oilseeds and pulses discussion among importers, producers and traders was accompanied by trade-facilitation dialogue with government agencies.

The conferences this year in Ho Chi Minh City and Shanghai followed similar events last year in Beijing and Guangzhou.

“The Chinese market is critical for Australia’s grains industry, so this demand for information is very encouraging for our industry and for Australian grain growers,” co-host organisation Grain Trade Australia (GTA) CEO Pat O’Shannassy said.

The AGIC Asia Conference series is hosted by GTA together with Australian Oilseeds Federation and Pulse Australia.

Grain trade between Australia and China in six decades has evolved from fundamental commodity business supplying wheat or barley to foodstuffs business driven by technical aspects of food manufacturing demand.

“With the economic growth resulting in a rapidly growing middle class demographic combined with changing dietary preferences along with large population and Australia’s proximity to China, it is an extremely important market to the future growth and success of the Australian Grains Industry,” Mr O’Shannassy said.

“Australia’s inputs are used in a variety of products in China including malt barley for beer production; wheat flour for various products including noodles, dumplings and steamed buns; sorghum for both feed and alcohol production; canola crushing for the retail vegetable oil market and as raw materials in various stock feed diets.”

Deregulation in Australia has made it necessary to keep open fresh dialogue between agencies of the Australian government and governments of importing countries, exporters and importers.

As a supplement to the conferences, Round Table events, hosted by GTA and Grains Industry Market Access Forum (GIMAF) involved high level discussions and dialogue with government agencies and industry.

Their purpose is to align commercial, technical and the regulatory trade environments to facilitate grain trade between Australia and its trading partners.

An Australian grain round table discussion is planned also to accompany AGIC Asia – Indonesia in May 2017.