ARGENTINA’s wheat exports are set to double over the next decade, potentially challenging Australia’s competitiveness in key markets, according to a new report from the Australian Export Grains Innovation Centre (AEGIC). 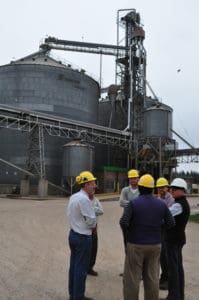 “Argentina accounts for 15 per cent of the global grain trade, exporting 86 million tonnes (Mt),” he said.

“While corn and soybean are still their main grains,  wheat will become increasingly important for Argentina.”

Prof Kingwell said Argentina was increasing its wheat yields at a faster rate than Australia, and this trend would continue as more farmers used increased inputs, adopted superior varieties and used improved technologies.

“Argentinian wheat production is projected to easily hit 21Mt over the next decade,” he said. “In addition, the area planted to wheat could increase by a further 2 million hectares. This means there will be around 14-15Mt of wheat regularly available for export, more than double the current average of about 6.5Mt.”

Prof Kingwell said this should be a cause for concern for Australia.

“As its exports grow, Argentina is also likely to commit more organisational resources into market development.

“Argentina’s wheat production is a smaller threat than that of Russia and Ukraine. Nevertheless, the situation should still be monitored and responded to by Australia.”

Prof Kingwell said there was a need for greater intelligence to be gathered about the specific characteristics of Australian wheat that are required in key markets.