AUSTRALIA exported 2.66 million (Mt) tonnes of wheat in May, up 11 per cent from 2.4Mt shipped in April, according to the latest export data from the Australian Bureau of Statistics (ABS). 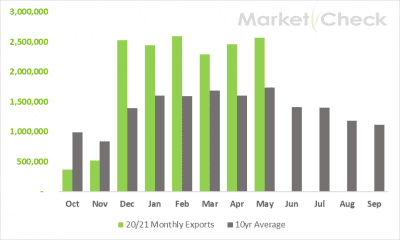 “May was another big month of wheat exports, and continued the streak of big volume months for this calendar year,” Market Check head of strategy Nick Crundall said.

“Western Australia remains the load-bearer of the volume on around 962,000t, while New South Wales came in second after a decent jump month on month to 604,000t.

“Going forward, we can expect another big month in June of more than 2Mt before volumes should begin to drop as we reach the end of the exportable surplus in states like South Australia and WA.”

In containerised exports, volume dipped below 200,000t for the first time since December, with total boxed exports at 183,306t being down 11pc from the April total.

This could well be an indicator of compounding problems in the container market which are being felt most at Sydney’s Port Botany.

In the bulk durum market, Italy took 95,604t, the biggest monthly figure for a single durum destination seen in years which surpassed Australia’s durum exports to Italy seen in February of 84,375t.