MARKET access for Australia’s export canola trade to EU was renewed by a European Commission (EC) decision over the weekend which recognised Australia as the first country to comply with new EU benchmark legislation. 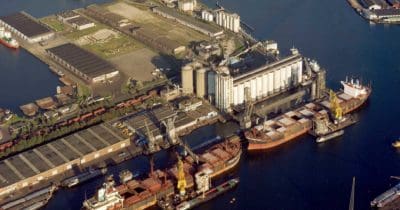 Crushing plants like this Bunge facility in Amsterdam use Australian canola, which has been endorsed by the EU for its low-emissions production.

Australian Oilseeds Federation (AOF) executive director, Nick Goddard, said Europe could have shut its doors to Australian canola had it not been found to comply with low-emissions production requirements.

Through the AOF and the Australian Export Grains Innovation Centre (AEGIC), CSIRO was commissioned to generate a report about Australian canola production in response to an EU law, passed about two years ago, to ensure the EU would meet its own greenhouse gas-reduction targets.

This set a timeline for review and compliance by suppliers to meet strict new feedstock requirements for EU biodiesel manufacture, effective 1 January, 2018.

“The EU market is too valuable to lose for Australian canola growers. Australia’s annual canola exports to the EU are typically worth over A$1 billion, and nearly all is used for biodiesel production,” Mr Goddard said.

This is because canola, predominantly non-GM product available from Australia, readily finds markets for canola meal in EU feed markets.

“Many Australian farmers rely on canola production, and securing access to lucrative markets like the EU is crucial to underpin the security and general profitability of cropping in many farm regions across Australia,” AEGIC chief economist, Ross Kingwell, said.

“The vast majority of Australian canola is non-GM, which attracts a price premium of approximately $20-$40/t in the EU,” Professor Kingwell said.

“This earned the Australian industry around an additional $100M in 2016/17. Australia’s non-GM canola offers more options for the European supply chain.”

National grain farmers’ representative body, GrainGrowers, has welcomed the news that the EC had secured ongoing access to the EU for Australian canola.

“Passing this legislation was critical for both ongoing market access and the profitability of Australian canola growers.”

Next month, this target will increase to 50pc for biofuel refineries built before 5 October 2015, and 60pc for installations commissioned since then.

Any country selling feedstock for use in EU biodiesel needs to demonstrate it meets the higher target levels of emission savings.

Australian canola seed, with an average carbon footprint at the farm gate of 468 kg CO2-equivalent/t, will be very competitive in this important market.

Dr Eady and Lifecycles director, Tim Grant, tracked the GHG emissions of all facets of canola farming in each Australian state.

The report found that greatest emissions came from the manufacture of fertiliser, the breakdown of crop residues, and emissions from soil.

Emission variation between states was largely driven by climate differences.