BARLEY has increasingly become the grain of choice among eastern states feedlot operators this year, as a wide price gap appeared between the two major white grains.

Many southern Queensland and northern NSW commercial feedlots are currently feeding 100 percent barley as the grain portion of rations, as more pricey wheat supplies bought during the drought are drawn down, Grain Central and Beef Central has been told. 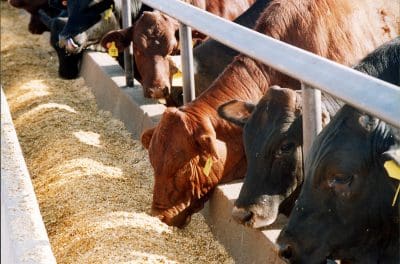 While a grain trader said there was historically a $25-$30/t spread in price between wheat and barley, that figure was $50/ in the current market, and had at times gotten to $80-$90/t.

The withdrawal of major Chinese buying for Australian barley earlier this year (click here to view earlier story) was one factor in the relative price difference, but so too was the large surplus of barley produced in WA, Victoria and South Australia last season.

Barley had now more or less replaced wheat in interstate feedgrain shipments arriving in the Port of Brisbane in recent months from WA, and via truck from Victoria.

One grain trader estimated that up to one million tonnes of WA barley may have arrived on the east coast for livestock use over the past 12 months. More recently, supply had swung to Victoria, with growers now emptying their silos to supply the feedgrain markets further north.

An unusual pricing trend has occurred because of the reliance on grain supply delivered via ship this year.

Customers closer to the coast, who traditionally have paid a freight premium for trucked grain supply from growing areas further west and south, are currently reaping a $10-15/t advantage, because they are closer to the port. 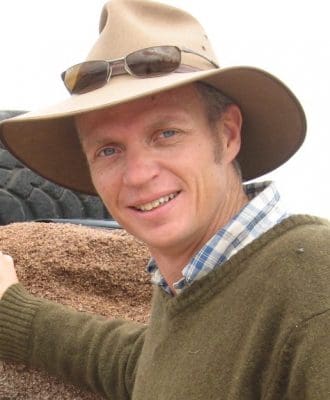 Feedlot nutritionist Dr Rob Lawrence said barley had started coming into greater favour during the drought, because it was not only becoming cheaper on an energy basis, but because its higher fibre value than wheat allowed yard managers to reduce their roughage inclusion in rations, at a time of extreme roughage scarcity.

However it was important to consider barley’s lower feeding performance than wheat when considering relative price, he said.

“For dry rolling, feed barley is about 10-15pc lower in energy than equivalent wheat, and can tend to be more variable,” Dr Lawrence said. “That has to be accounted for in price.”

“For steam-flaking applications, the difference is less – perhaps a 5-6pc difference,” he said.

While metabolisable energy tended to be the benchmark used in assessing feedgrains in Australia, Dr Lawrence said this tended to under-estimate the true energy value of higher energy feedstuffs. On a net-energy-for-gain basis, dry-rolled barley rated at 1.4 megacals/kg, and wheat, 1.5.

Implications of reduction in numbers on feed

The reduction in numbers on feed in many feedyards in recent months has prolonged exposure to high-priced grain, trade sources said.

“A lot of yards are long on grain supply, with stocks likely to last until November or even into early next year,” a grain trade contact said.

“That effect has been made worse, because the numbers on feed have dropped off, big time.”

Grain stocks bought earlier, that might have lasted until August or September if feeding activity had remained high, will now persist to November in some yards, because there’s ‘fewer mouths to feed.’

Estimates vary widely, but some suggest cattle numbers on feed in Australia may now be 20-25pc behind their all-time highs seen back in December, fuelled by drought. That change has perhaps been made worse, because some yards were feeding at well over 100pc of capacity late last year due to drought pressure.

“It means the industry is coming off an extreme high occupancy figure,” one contact said.

The result was that some yards were currently stuck with grain that now looked very expensive.

“Everyone knew it was going to happen – when the rain finally came, operators were going to get stuck with very expensive commodities that they were just going to have to work through. At the time (January-February) many lotfeeders were convinced it was never going to rain again. They had to go long on grain, because nobody expected to see the rain we did in March.”

Lotfeeders were slowly working through that expensive grain, averaging it down a little by blending with more recently-bought barley at lower prices.

“But it’s been pretty tough,” the source said.

Some stocks currently being fed on the Darling Downs were bought earlier at $440/t for wheat, and barley around $400. In comparison, barley currently was currently trading around $355/t ex Downs, and wheat around $390.

Some industry reports suggest sorghum is again coming into calculations for feedlot rations, but Dr Lawrence said he had not seen evidence of it yet.

“I understand there’s a fair bit of standing sorghum in Central Queensland, but owners are still waiting for it to dry down enough to harvest,” he said. “The issue with that is it is going to degrade on the head.”

“Some growers have expressed interest in fermenting those crops – harvesting the grain, rolling it and raising moisture level to 35pc, and ensiling it for a month. This process increases the energy value in sorghum by about 20pc,” he said.

To become more attractive again as a feeding option, sorghum would have to be priced well below barley, Dr Lawrence said.

“There’s talk that new season barley may have a ‘2’ at the front of it,” he said.

“If barley was likely to fall to say, $260/t, sorghum would have to be 15pc cheaper than that to be attractive to feeders – say around $220/t. And that would only be of interest to those with steam flakers.”

Another factor was the ‘loss of expertise’ in milling since the last time sorghum was widely fed in the feedlot industry.

“The turnover of personnel in the bigger yards means many of the milling staff may never have flaked sorghum before. They have no idea of the ‘pain’ involved,” he said.

“There’s issues with getting the moisture in it, and the slowdown in mill output. At times, processing sorghum can nearly halve the rate of production of flake.”

A grain trader who specialises in domestic feedlot work said he was aware of some sorghum being used, but not yet in quantity.

“But because there is still so much imported interstate feedgrain coming in, supply (and demand) for sorghum is still a little hard to establish at present.”