SEASONAL conditions triggered lower wheat fob (free on board) bids in the Black Sea region and to a lesser extent in the United States over the month of June, while price drivers at other wheat export origins included high temperatures at grain fill in the EU and worries in Australia, according to the monthly overview of world wheat prices in a United States Department of Agriculture report released last Friday based on data supplied by the International Grains Council.

The seasonal cycle of prices in Argentina and Australia, in both instances reflecting mid-marketing-year tightness of supply showed end of June prices up by $5/t and $2/t fob respectively.

Monthly price moves for the northern hemisphere origins Canada, US and Black Sea region were lower approaching harvest, while EU wheat prices in June were up marginally as concerns over hot and dry conditions had more than offset the impact of harvest pressure. 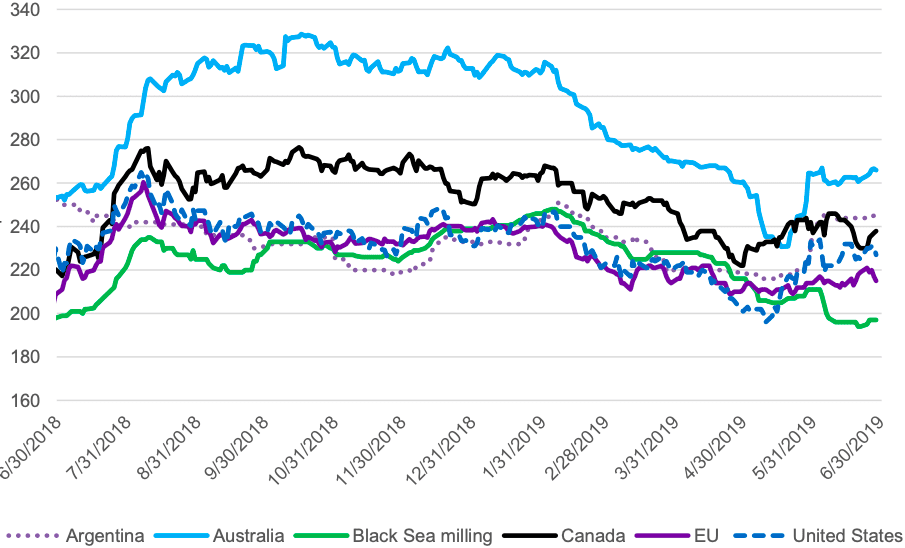 Black Sea milling prices had the largest price decline and U.S. prices also dipped – both with the onset of winter wheat harvesting.

Black Sea wheat is starting off the marketing year very competitively priced, which will likely contribute to another fast start to its export season, the report said.

Black Sea milling wheat price bids FOB (free on board) were lower over the month of June with new crop wheat harvest ramping up.