BIOMAR Australia has released plans to develop a $56 million plant at Wesley Vale on Tasmania’s north coast which is expected to boost the state’s use of wheat and faba beans as preferred inputs for salmon feed. 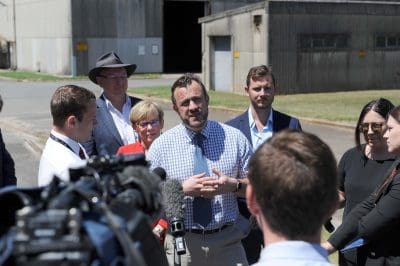 Biomar’s UK, Australia and the Northern Sea Region managing director, Paddy Campbell, said the plant would produce up to 110,000 tonnes per annum of aquafeed, and create 55 full-time jobs and an additional 30 roles across the region in areas including port services and logistics.

The company entered the local market in 2003, and said that one in every three Atlantic salmon farmed in Tasmania is currently fed BioMar products imported from Scotland.

The BioMar Group is one of the world’s leading developers and producers of aquafeed, and earlier this year announced its intention to build a plant in Australia to supply domestic aquaculture operations.

Dr Campbell said BioMar was proposing to construct the aquafeed production facility on the site of the former particle board manufacturing mill located at 329 Mill Road in Wesley Vale.

“We are currently in conversation with the local community to seek their input and feedback on the proposal concept, and we look forward to continuing this conversation throughout the development and construction phase of the project.

The Tasmanian Government has committed $2.3 million to the project, and assisted BioMar with its procurement of the Wesley Vale site.