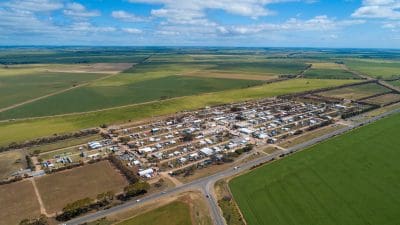 The Yorke Peninsula Field Days held this week were held in a region which last weekend got some beneficial rain. Photo: YP Field Days

PROMPT northern feedgrain values have retreated from their highs of last week as the market transitions to new-crop supplies, while in southern markets, prices have dropped a few dollars in response to timely rain in some areas.

Many crops in southern districts including the Lower and Central Eyre Peninsula, Yorke Peninsula, Mid and Lower North and south-east of South Australia received falls of 20-40 millimetres in the past week, while crops in the Victorian Wimmera mostly got around 10mm.

The Mallee and New South Wales largely missed the rain, and are losing yield potential as hay-cutting continues on crops with poor grain prospects.

Frost is thought to have clipped yield from some crops in NSW, Victoria and South Australia, and hay values continue their downward trajectory as supply increases.

Cereal hay in southern NSW is available at $260 per tonne on-farm, down around $100-$150/t on on-farm values for hay in northern NSW early this month, while Mallee hay is being offered at $210/t on-farm.

The prompt delivered market for wheat on the Downs region of southern Queensland is trading at around $430/t, with Central Queensland (CQ) grain straight off the header, and boat wheat from Western Australia ex the Brisbane free-on-truck (FOT) market supplying the volume.

This price is down a few dollars from Friday, when scrambling for nearby deliveries lifted rates to a high of recent months.

“The exporter has no chance at the moment to compete with the prices being paid into feedlots on the Downs,” Delta Agribusiness Armidale-based broker Tom Vanzella said.

The CQ wheat harvest is taking place in a wide window this year to reflect the crop’s varied time of sowing, and many loads to date have had a higher-than-normal incidence of green grain.

Mr Vanzella has estimated the CQ wheat harvest to be nudging the halfway mark, and said green grain was not slowing the heady pace of off-the-header sales.

“Most wheat is going into the feed, so it’s not an issue, and I’d say 90pc of the wheat harvested from south of Emerald has sold on to the Downs already.”

The Brisbane FOT wheat market is sitting at $410-$425/t for delivery up to December, and was supported last week by the realisation that Western Australia’s new-crop wheat and barley yield prospects had slipped in Western Australia.

The spread between sorghum and wheat has just about halved from the benchmark $60/t, with current-crop CQ sorghum trading at around $335/t, which equates to roughly $400/t for prompt delivery on to the Downs.

“It doesn’t look like we’re going to get a spring plant of sorghum, so that means new-crop is a long way away.”

Moisture profiles remain desperately low in southern Queensland and northern NSW, and growers are unlikely to plant an early sorghum crop on anything less than 80mm of rain in coming weeks.

Given the current forecast for rain in summer-cropping areas, this looks highly unlikely.

Stewarts Grain Trading trader Robert Quinn, Inverell, said the northern NSW cereal harvest was expected to get going in the next 10 days or so, and the market was preparing to receive a very small amount of new-crop tonnage.

“A lot of growers are waiting to see what they’ve got in terms of yield and quality, and most won’t sell without an F2 option on barley,” Mr Quinn said.

Wheat, barley and canola crops are few and far between in northern NSW, as many with limited grain-yield prospects have already been cut for hay.

“We saw a big spike last week, but it’s softened.

“It feels like the trade covered a lot of shorts last week.”

In nearby slots, an inverse of around $40/t lives on between the current-crop and new-crop markets, with the January Brisbane FOT price based on WA wheat sitting at around $380/t.

Griffith-based Grain Link trader Richard Gale said execution costs for landing Victorian, South Australian and Western Australian grain were being examined now that the inverse between current-crop and new-crop has disappeared, and local supply appeared to be shrinking.

“There are a lot of crops being cut for hay around here.”

South of the River Murray, struggling crops are being cut for silage as well as hay to supply Victorian dairies, while crops with good yield prospects in southern NSW, and northern and western Victoria look sure to be harvested for grain if the weather stays mild.

“The trade and the community are watching with interest to see how this crop finishes.

“It looks like consumers from Dubbo and Narromine south will be fed by rail again this year, and the coastal and northern markets will be using boat grain.”

In the Riverina market, prices have eased by $5/t in the past week in response to recent yield-preserving rain, and wheat delivered into nearby and new-crop positions is trading at $370-$380/t.

ASX lower in zig and zag

Both barley and wheat ASX futures fell $12/t through the week.

Weather markets in the critical month of September have seen ASX futures trade in approximately a 5-6pc band while industry balances the prospect of enough rain to finish southern crop, the damage caused by drought and frost already evident while maintaining a rational premium over export parity.

The eastern wheat (WM) January 2020 contract settled yesterday at $355/t, in a market which traded modest volume but at lower prices each day. A week earlier it was $367.50/t. The weekly volume traded was 2085 lots compared with 2118 lots previous week. Open interest on Wednesday fell to 13,161 lots.