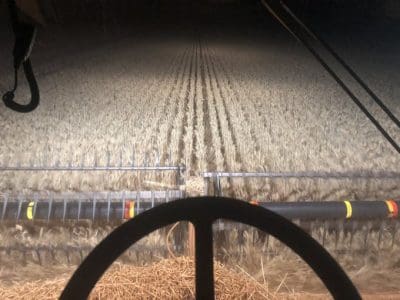 SUPPLY-SIDE pressure is weighing on barley and buying it some demand from wheat as tonnage starts to roll into bulk-handling sites across southern Australia.

The spread between wheat and barley is now at around $45-$47 per tonne on the Darling Downs, compared with around $55/t in Victoria, which indicates barley is pricing into southern Queensland rations.

In Queensland and on the plains and outer slopes of New South Wales, the barley harvest is over for many growers, with high protein the stand-out feature.

Quality is mixed, with reports of protein at a very high 13-19 per cent, and screenings of up to 50pc.

Traders report F1 and discounted F2 and F3 barley are all finding homes in feedlots and regional mills, and loads of all three grades are being forward sold to tablelands graziers who are preparing for a dry summer and autumn.

Most grain-growing areas of NSW and Victoria are forecast to receive 10-30 millimetres of rain in coming days.

This will delay the start of harvest for some, and be ideal to finish crops in later areas including the Wimmera, where yield prospects are already strong.

“Through the trade, liquidity has been sporadic, but the price might have dropped $5/t in the past week,” Mr Stroud said.

“Some guys are nearly wrapping up on their barley and others are just starting.

“The Northern Mallee might be halfway through their barley, and some of those high numbers the feedlots have been paying will disappear over coming days.”

At Junee on the south-west slopes of NSW, Hanlon Enterprises trader Troy Blackman said mixed farmers to the west were filling their storages ahead of thinking about selling any grain into the cash market.

“Most of the farmers are multi-enterprise, and trying to keep barley on farm, especially with (barley) prices dropping on a weekly basis,” Mr Blackman said.

“There’s a lack of availability of wheat, and greater availability of barley, but an issue we are seeing with the early-harvested barley crops is screenings and light testweights.”

This is evident in crops on the outer southern and south-west slopes and plains of NSW, where finishing rain failed to fall, and the trend looks set to continue into the north-west corner of Victoria.

Mr Blackman said some pockets of the wider region had good grain quality, and the inner slopes have better yield and quality prospects, but were still at least one week away from harvest.

“The biggest issue we’re seeing from early crops is screenings, but if it’s got good test weights, it will go to sheep feed up into the tablelands.

“It’s more about follow-up rains that didn’t come, and the crop really died towards the end.

“There’ll be screenings out there in wheat, but there’s not a lot around.

“It’s going to be variable.”

The wheat harvest is starting in southern NSW and the early regions of South Australia, and is expected to start for some Mallee growers after the rain.

The Darling Downs wheat market at around $420/t for November-December delivery is holding its small premium over January delivery, as supplied by new-crop Western Australian grain offered out of the Brisbane free-on-truck market at $415-$418/t.

“It’s buying a bit of demand,” one trader said.

Flexi Grain South Australian regional manager Sam Grieve said the consumer was buying hand to mouth for nearby delivery, and the trade was reluctant to buy up big at harvest in case supply-side pressure increased.

“After what happened last year, the trade is fairly risk averse, and isn’t going to go long.

“It’s the domestic consumer that has done very well in the past 12 months; they’ve been rewarded for buying hand to mouth.”

China’s pricing investigation into Australian feed barley has seen it withdraw from the market, and despite heady domestic demand, prices for the grain have trended down since January.

“If China stepped in, or Saudi, the domestic market would have to secure tonnage, and that’s when things would change.”

Mr Grieve said until that happened on feed barley, the trade would be reluctant to take positions for months out.

Thanks to a finishing rain last month in many areas, quality is said generally to be good.

In the Adelaide port zone, traders are accumulating grain for transfer by rail to consumers in central and northern NSW, and to cover consumers in South Australia’s south-east.

This is reflected in the spread between wheat and barley of $35-$45/t in the Adelaide port zone, compared with $50-$55/t in the export-focused Port Lincoln zone.

Another 2pc price decline was seen in both the ASX feed barley and wheat contracts this week.

The ASX feed barley (UB) January 2020 contract settled on Wednesday at $270.50/t, declining each day from the high last Thursday at $280/t. The barley contract did not trade during the week and the open interest declined to 2422 lots.